Apple hasn’t announced a new iPad yet, but already a rumor circulated at CES 2012 that people have seen it. Jeremy Horowitz of iLounge claims to have seen what he called “the next-generation iPad” at CES. He doesn’t have tangible proof, like a picture, because he said the new iPad looks exactly like the iPad 2. “From the back, you could walk past this new iPad on display and have no idea that anything changed,” explained Horowitz.

The iPad 2 slimmed down a bit, but it will put on weight for the third generation with a slightly thicker design adding 1mm of thickness. The camera hole opening was “noticeably” bigger than the iPad 2 camera. It has a silver ring and looked like the iPhone 4S camera without the LED flash.

The screen supposedly will be the heart of Apple’s refresh, but Horowitz said he didn’t see it. An unnamed source from “one company” had “heard” the display would be slightly smaller. However, Horowitz said, “… the front glass bezel I saw didn’t seem to suggest that.” 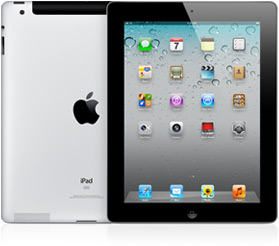 My question: how could you not see the screen but see the bezel, Mr. Horowitz? Sounds a bit fishy to me, unless he’s talking about seeing the screen turned on.

He claimed that all the other design features mirror those of the iPad 2, including the buttons, switches, speakers, dock connector and headphone jack, meaning most current generation accessories will fit the new design. If true, that’s good for those who plan to upgrade from iPad 2.

Horowitz tried to temper excitement, saying the device he saw looked like it was not new, possibly six months old. That means it could be a pre-production unit or something totally different from what we can expect when the real next-gen iPad comes to market.

iLounge posted a picture of a device that ended up looking a lot like the iPad 2 last year at CES 2011. We’ll be able to keep score on iLouge prediction accuracy when Apple reveals the new iPad later this year, likely sometime before Spring.

I don’t think it takes a genius to say the camera and screen will be better, while the next iPad will retain the same basic design. The iPad 2 is a huge hit, so why change when they are so far ahead of the competition? I’m betting that the real news from this year’s iPad refresh will be a smaller 7″ display to compete with the popular Kindle Fire.

The fact that about 250 Apple employees are in attendance at CES mean that it an iPad 3 could be there as well (source: Apple Insider)