The new iOS 4.3 beta that was released to developers this week reveals hints that Apple may employ a proximity sensor in the next iPad to automate the process of locking and unlocking the tablet display. 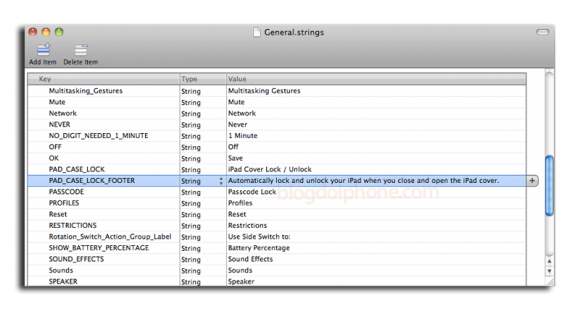 In the past, Apple has used–and popularized–proximity sensors on the iPhone to automatically turn off the device’s display while in a call. That feature helps to prevent phantom button presses while you hold the phone’s screen to your face. While the iPad tablet doesn’t allow for phone calls, and would be too big to be held against your face for a VoIP call, a proximity sensor could work with a number of iPad cases and covers to automatically lock and unlock the screen when the cover is closed or opened, reducing the number of tasks or button pushes required to begin using the tablet.

Evidence for the proximity sensor as it relates to the case being opened or closed have been discovered in the “PAD_CASE_LOCK” and “PAD_CASE_LOCK_FOOTER” strings found in iOS 4.3 beta.

Users are to access this functionality, and can enable or disable this feature, through the Settings panel, which would allow users to bypass pushing the screen wake button and swiping to unlock.

This feature can potentially help Apple remove buttons on the iPad. A recent feature in the iOS 4.3 beta allows for users to bypass the home button to evoke commands such as returning the home screen, accessing the task switcher, and other through multi-touch gestures. Since that feature was uncovered, Apple has stated that those functionalities won’t be available when iOS 4.3 is released to the consumer and those features were made available for developers to test their apps.