Though it’s been widely believed that Apple will be calling its next generation flagship iOS smartphone the iPhone 5S, a new leak suggests that the device could bear the iPhone 5G moniker instead. 5G, in this case, would not refer to 5G mobile broadband wireless technology in the same way that the iPhone 3G was associated with Apple’s upgrade to supporting 3G GSM network technologies. Whatever the name of the next iPhone flagship, that device will continue to support the 4G LTE mobile broadband technology that continues to deliver fast Internet upload and download speeds with minimal latency where available. 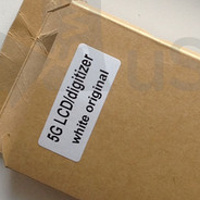 The new iPhone 5G name comes by way of a leaked packaging from China, according to Phone Arena, that contains what is believed to be the display of the next flagship phone. The leak should be taken with a grain of salt at this time. The packaging could easily be faked. The image originally appeared on uswitch.com.

In addition to the flagship iPhone 5S or iPhone 5G, Apple is also rumored to be releasing a low-cost iPhone as well in the form of the iPhone 5C. Though the iPhone 5C’s name initially came by way of a leaked retail packaging for the device, the packaging was said to be a fraud though industry observers says that the name is accurate and that the “C” in 5C refers to the colorful plastic casing that the model will ship with.

Both the iPhone 5C and the flagship successor to the current iPhone 5 are expected to be announced and released in the fall, so we’ll continue to hear more about the devices through leaks in the coming weeks. The iPhone 5S has been described to keep the same design as the iPhone 5 while adding in a fingerprint sensor.