British retailer John Lewis is pushing the idea that the next iPod touch will includes several upgrades, including video cameras. Seems like a reasonable enough assumption to me, but they’re also listing FaceTime video calls as a supported feature. Sorry, but cameras do not equal FaceTime. 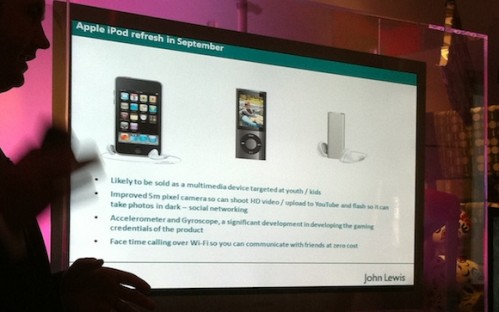 One of the strengths of FaceTime is that it connects with a phone call. No need to setup an additional account. No third-party app involved. It uses Wi-Fi to handle the actual video call, but the initial connection is done through a standard phone call. Notice how that won’t work for the iPod touch.

Granted, it should be possible to connect via FaceTime using other methods. iConverged discovered the video connection is done through SIP and STUN and routed through the IP address and port. The trick is getting that IP address and port, which are not static, from one user to the other. Judging from the FaceTime URL scheme, it appears Apple only supports phone numbers for making that initial connection to transmit the IP data.

Potentially, an iPod touch with video camera could get FaceTime support through a third-party system that supports calls through phone numbers, such as Skype or even Google Voice, but native support seems highly unlikely without involving some sort of additional account.