Users will finally learn about the next generation Xbox at a press event on May 21st.

According to Larry Herb, Director of Programming for Xbox LIVE, Microsoft will “mark the beginning of a new generation of games, television and entertainment” on May 2st by holding an exclusive press event that day. Users will be able to see what’s being showcased at the event at home via a livestream using Xbox LIVE, Xbox.com and by watching Spike TV.

After revealing the console at the event, Microsoft will then go on to showcase new more details and information about the console’s launch titles at this year’s Electronic Entertainment Expo or E3. E3 will begin on Tuesday, June 11th however Microsoft typically chooses the Monday before the show opens to showcase its latest products and upcoming Xbox Dashboard updates. It’s customary for the company’s press event at E3 to also be streamed online. 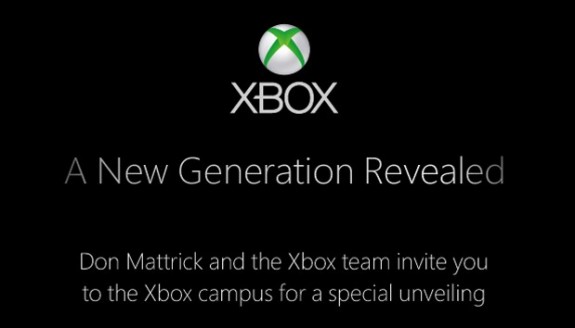 The invitation being sent to press for the unveiling of Microsoft’s next generation Xbox.

The feature list of the Xbox 360’s successor has been speculated about for months and includes everything from a lack of the ability to play Xbox 360 games to a console that must have an internet connection at all times.

Earlier this Month reports from The Verge claimed that Microsoft’s next Xbox would be able to interface with cables boxes like the those Comcast, Verizon, and AT&T supply its customers with. At the time speculation centered on a possible feature in which the new Xbox would be able to overlay it’s UI on top the UI of cables boxes which are generally considered to be subpar.

Read: The Xbox Could Take Over TV & Cable Boxes

About the only thing we do know about the next the console is that it appears Microsoft’s efforts to focus its entertainment ecosystem around it will come to a head with this next console. Microsoft announced that it would be selling its Mediaroom cable box products to Ericsson in order to focus on its “mission to make it the premium entertainment service that delivers all the games and entertainment consumers want – whether on a console, phone, PC or tablet.”