Late last year the Google Nexus 10 tablet slowly disappeared from the Google Play Store, but instead of out of stock it was listed as “out of inventory” which caused rumors to swirl of a successor coming alongside the new Nexus 5. However, it never arrived.

We’ve heard countless reports and tips suggesting a new Nexus 10 2 is in the works from Samsung, ASUS, and more recently maybe even LG, but we’ve still yet to see any concrete evidence. Rumors have suggested a Black Friday reveal, followed by an announcement at CES, but we’re still here with no new 10-inch Nexus tablet. Today though, the famed leakster @evleaks just dropped a press photo of the new Nexus 10. 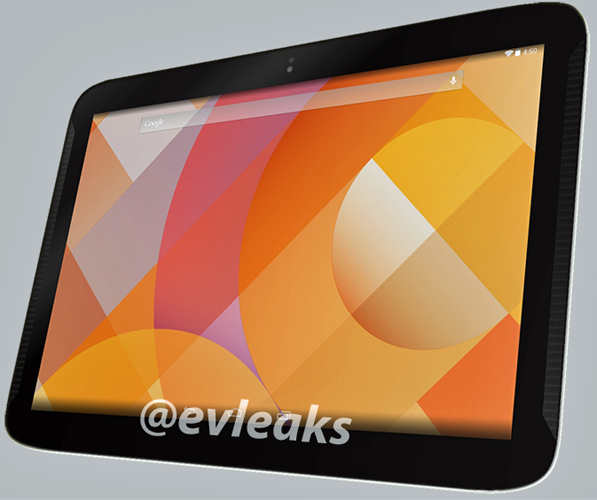 Update: The post has since been removed, and other sites are receiving similar photos, so this may be a false alarm. We’ll continue to monitor for news regarding the Nexus 10.

@evleaks is known for being highly accurate when it comes to leaks and rumors, but today he has uncharacteristically added a warning label to the photo. Meaning he won’t vouch for it but still wanted to share the information. We’ll be taking this with a grain of salt, but this could be the new Nexus 10 by Samsung.

There’s no mention of a two, and it’s simply being listed as the Nexus 10 by Samsung, and the specs sound quite nice. Our only concern is this says Android 4.5 KitKat, although Google’s latest version is currently Android 4.4.2 KitKat. And we don’t see 4.5 coming anytime soon, and more likely it’ll be Android 4.4.3 instead.

Overall the image above is a pretty poor press render, and could very easily be fake. That being said, it’s accompanied with specs talking about a 10-inch 2560 x 1600 HD display, Samsung Exynos (likely 8-core) processor with 3GB of RAM, and will come in 16 and 32GB storage variants. Then, if true, we’ll enjoy a 5 megapixel rear and 3 megapixel front camera setup.

Sadly there’s not much else to go on here. There’s no talk of a release date or price, but hopefully more details will be coming soon. It’s worth noting the 16GB Nexus 10 has been missing from the Play Store since October, but only today did Google finally put “out of inventory” on the 32GB version, so maybe a successor really is about to be announced.