The feature which, Matias Duarte, director of Android design calls, “the single most exciting thing for Nexus 5,” will not come to the Nexus 4 with the initial Android 4.4 update.

Android 4.4 on the Nexus 5 includes a new Google Now infused launcher that offers faster access to the Google Now service with an “Ok Google” phrase and with a swipe to the left home screen which is actually Google Now instead of a place for widgets and apps to sit.

In Google’s Android 4.4 Quick Start Guide the company specifically calls out the new Android 4.4 home screen for the Nexus 5 saying, “The Home screens on Nexus 5 work differently from Home screens on the other Nexus devices.”  Originally we thought this was simply a nod to the fact that the Nexus 5 was first to get the faster access to Google Now, but that isn’t the case. 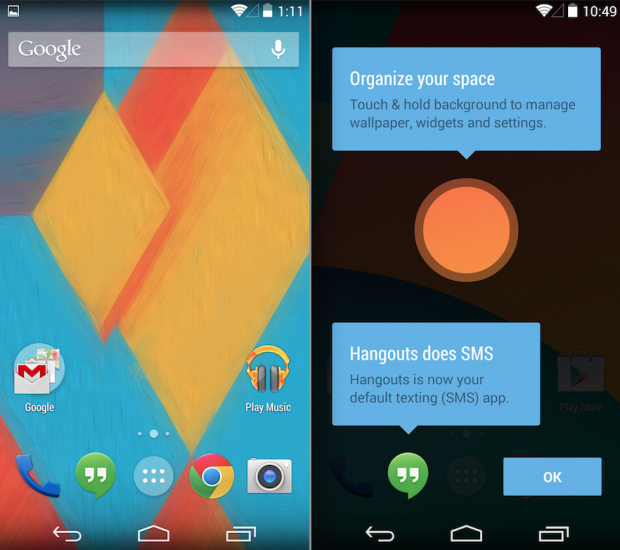 Here is the Nexus 5 Android 4.4 launcher which users can install with three files on the Nexus 4.

The Verge writes, “the new Launcher on the Nexus 5 is exclusive to the phone — though the company may change its mind and offer it for the Nexus 4 and perhaps even put it on the Play store someday.”

To be clear there doesn’t appear to be any specific hardware or technological hurdle in the way of the new Google Now launcher coming to the Nexus 4 with Android 4.4, only an arbitrary decision by Google to keep the launcher confined to the Nexus 5.

The Nexus line of smartphones are best known for fast updates that bring the new features from the latest versions of Android to older devices. With Android 4.4 and the Nexus 5 we see a different approach, segmenting the best new features for the Nexus 5 and cutting off support for the fairly recent Galaxy Nexus smartphone that Google released in 2012.