The Nexus 4 runs great out of the box, but savvy users will want to change the settings for better performance and security.

Google launched Android 4.2 (Jelly Bean) on the Nexus 4, and with it a number of new features and better integration of apps like Google Now.

With the new version of Android, Nexus 4 owners can secure the phone and still quickly access information with lock screen widgets. New features in Jelly Bean include the ability to set mobile data usage alerts to avoid overages and with a few settings and apps it’s easy to backup the Nexus 4 to the cloud and find a lost device, even if the battery is dead.

After changing these 10 Nexus 4 settings Google’s latest smartphone will run at peak condition. 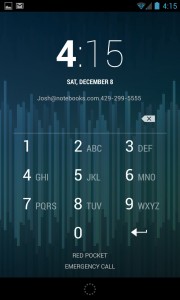 The Nexus 4 does not force users to create a password after linking a Gmail account, but it’s a very good idea. Users can choose from several methods of security so it’s easy to use the phone.

This allows users to switch to one of the following Android 4.2 security methods.

The password option allows for complex passwords, the PIN is a four digit security code and the pattern is a pattern drawn on the lock screen. The Face unlock is cool to see, but it may be possible to fool it with a photo.

Set Automatically lock to a reasonable time, like 5 to 10 minutes to keep the phone unlocked for a short period.

It’s also a good idea to set a Google Play password to prevent others from buying apps and making in-app purchases while using your phone. This is an especially good idea for parents. 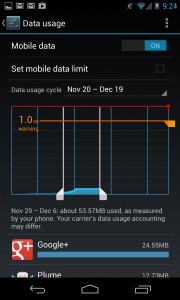 The Nexus 4 makes it easy to set up mobile data alerts and limits so that you don’t go over a mobile data cap. Most carriers that work with the Nexus 4 no longer offer unlimited data plans, and those that do often limit them with an asterisk in the fine print.

Tap on Settings -> Data Usage -> Move the slider to set a mobile data usage warning and a limit.

On Red Pocket Mobile, data usage us capped at 1GB and while Straight Talk advertises unlimited, users report getting cut off after using 2GB or more in one month.

After setting the slider, put a check mark next to the Set mobile data limit to set a hard stop on the usage.

The Nexus 4 knows which data is used over WiFi and which is used on mobile, and can keep them separate.

Read: 7 Reasons the Nexus 4 is Better Than the iPhone 5

The Nexus 4 can automatically back up your photos and videos to Google for safekeeping. This means even if the phone is lost or broken, you’ll have all your photos.

Setting this up is as simple as installing Google+, signing into your account and enabling auto-uploads.

The photos are automatically uploaded to Google and are private unless you opt to share a specific photo, so there’s no worrying about accidentally sharing a photo you don’t want the world to see, just by taking the photo.

This trick appeared in a Google+ commercial, and saved a new father’s photo, but it’s not just made for TV. Automatic photo uploads also saved the photos of people we know when their Android phone died.

Turn on Backup and Restore 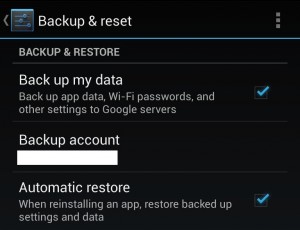 Google offers a Backup and Restore service that keeps important information backed up to Google so it can sync to an Android tablet and your next Android device.

Tap on Settings -> Backup & reset -> Check Back up my data

This allows the Nexus 4 to back up app data, WiFi passwords and other settings to Google. For added benefits, check Automatic restore.

This setting will automatically download and use app data when you re-install an app.

Read: 7 Reasons the iPhone 5 is Better Than the Nexus 4

The Nexus 4 and Android 4.2 allow users to set lock screen widgets to quickly check information while the phone is locked. This pairs with a locked Nexus 4 well, since it is possible to quickly look at a twitter feed, calendar and even email without unlocking the phone.

Pull down on the widget to make it full screen. Tap the lock icon at the bottom to unlock the phone.

Adding a Gmail widget means showing the sender, subject and first line of any message to whoever picks up your phone, so it’s not for everyone. To read or reply, the phone’s passcode is needed.

The calendar, Plume (twitter) and camera lock screen widgets are less likely to cause a security issue, and are incredibly handy.

The Nexus 4 supports a new screensaver mode called Daydream. By default Daydream is only on when the Nexus 4 is docked, on something like the Nexus 4 Wireless Charging Orb, but since that isn’t available we’re going to turn it on whenever the phone is charging.

Next, tap on When to Daydream -> and choose Either

This will allow the phone to enter Daydream mode while charging. You can preview the daydream mode by tapping Start Now. 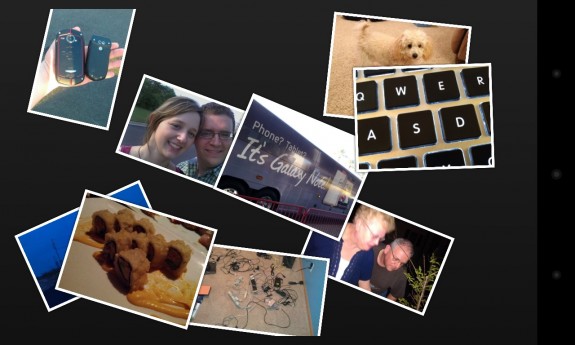 The Photo Table is a cool Daydream mode that uses photos on the Nexus 4 and in the Instant Upload category. Photos spin onto the screen and users can arrange them or flick them off the display.

Google Now is a cool app that offers voice control similar to Siri, but is smarter. Once set up, Google Now predicts the information you will need and displays it on cards that show up in the notification screen and in the Google Now app.

These include alerts for sports teams, traffic to home and work, weather, flight information, public transit, places and more. Google Now learns based on your search history, so it’s important to link it to your main Google account.

Open Google Now for the first time and pick your primary Google account. 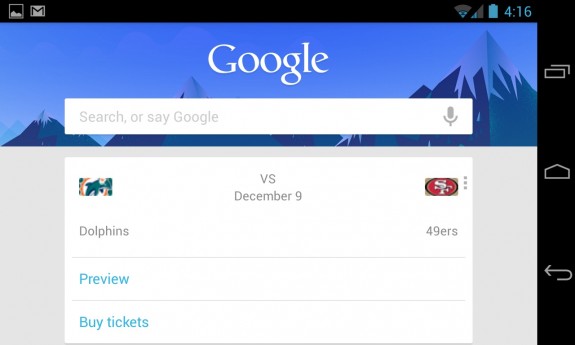 From here it will start offering information about where you work and what you are interested in. Open Google Now and tap on settings to configure sports teams and other information.

The cards will start to show up as you go through your day. You can dismiss cards with a swipe, just like notifications.

To open Google Now from any screen, slide your finger up from the home button. From here you’ll see cards and can start the voice search by saying Google, then your search.

If a phone is lost and locked with a password it is tough for the finder to return it, but by setting owner information, an email and phone number will show on the front of the phone.

Enter your contact info, but not this phone’s number.

This simple step can mean the difference between a phone that sits in lost and found and one that is back in your pocket. 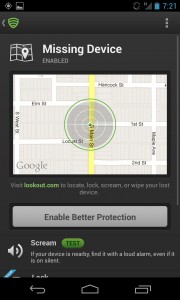 Android doesn’t include a Find My Phone feature like the iPhone, but with the free LookOut app it’s easy to track a lost or stolen Nexus 4.

Go to Google Play and install Lookout Security and AntiVirus. Make sure to turn Missing Device on.

Once set up, you can go online and find your Nexus 4 if it is missing or stolen. This also includes Flare, a feature that sends your phone’s last location before its battery dies. The premium features allow users to remotely lock and wipe the Nexus 4 if it is lost.

In addition to finding the Nexus 4, Lookout can also scan apps to help users avoid malware.

Gmail sounds alerts and notifications for every incoming message by default, which gets annoying quick. Setting up Gmail for Android right limits interruptions and means no more missed messages.

Tap on Gmail -> Tap on Settings -> Tap on the email account.

Another great idea is to go to the main settings screen, tap on General settings and scroll down to Auto-fit messages. Check this box to shrink messages to the Nexus 4’s smaller screen.