With recent rumors feeling confident in claiming Android 4.4 KitKat and the new Google Nexus 5 smartphone will be announced next week on October 15th, we’re now starting to get even more tips. The Nexus 5 has leaked multiple times already, with Google doing a terrible job at keeping it a secret, and this is one of the biggest leaks yet.

Up until today we’ve seen it briefly in a video from Google, pictures from the FCC, and a few 15 second video clips from a nightclub, but today we’re getting an entire gallery from Tutto Android. Not to mention tons of details like never before. This is a big leak and confirms the entire design, while showing us a better view of the front fascia, then plenty of looks at the new Android 4.4 KitKat on board. 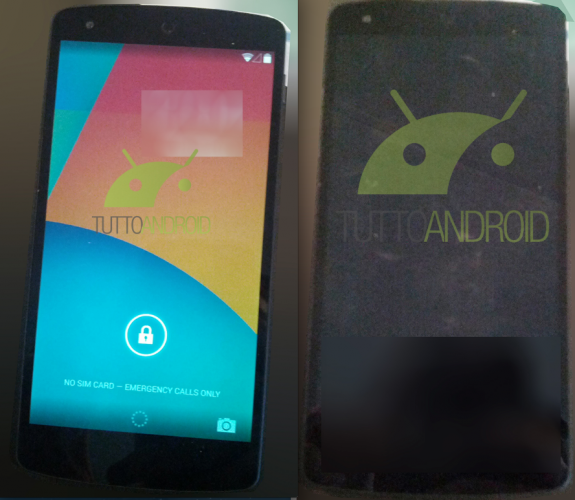 These exclusive “hands-on” photos have just arrived so we’re still taking it all in, but so far we see lots of changes, most which we already knew were coming. For one, the top notification bar is now transparent and will change colors based on the app or background wallpaper and color, which we see in all of these photos. Following other leaks we also see the new font and white color scheme for the clock and icons up top.

Looking at the image above you’ll see plenty of subtle UI tweaks to the Android software. The lock screen has a new camera icon down below, where a quick swipe will instantly launch the camera. Which seems pointless because we still have the gesture from left to right to instantly access the camera like we saw in earlier releases of Jelly Bean. 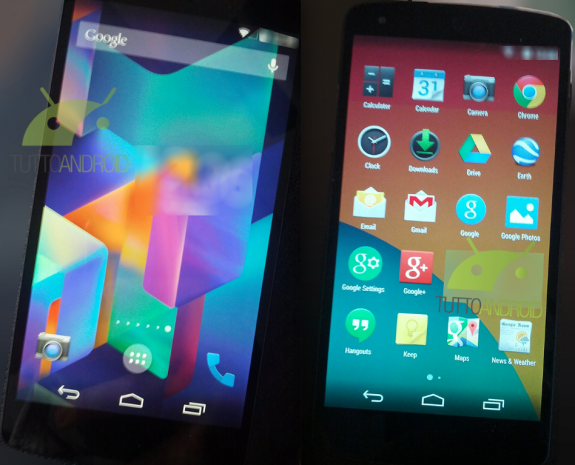 Android 4.4 KitKat will have plenty of changes, but nothing too drastic like we’ve seen as of late from Apple with iOS 7. Google is refining the software and user interface, not completely revamping it. There’s a new phone dialer icon, and if you look close, there appears to no longer be a “messaging” application. Which confirms reports that Hangouts will replace the SMS function. You’ll also notice in these screenshots the background on the on-screen navigation buttons on bottom is now transparent, instead of the boring black we had before.

We spot a new weather and time widget, which is blurred out. Then we can’t seem to find the usual “Gallery” app for photos, and Google+ Photos has been replaced with just Google Photos. Which also has a new icon. We’re assuming Google’s consolidated those into one application moving forward. Oh, and check out the new round Google Search icon.

Many of the UI levels have been replaced with transparent backgrounds that will change color with applications, to make the entire experience more seamless. The leakster also states you’ll be able to add more than 5 home screens to the device if you’d like, and that Google will introduce new gestures to instantly launch Google Search and Now for quick searches or voice commands. The same “always-on” listening mode we saw with the Moto X applies here, and a quick “Ok, Google” will initiate hands-free voice controls on the new Nexus 5.

Last but not least we’re seeing a few more pictures of the software and settings menu, which mirror leaks yesterday regarding a brand new location layer and settings options. You’ll also spot the “Tap & pay” section which will be using NFC for payments along with Google Wallet. Finally, the report states the phone is running Android 4.4 KitKat build KRS92B.

We have a feeling more details will arrive this weekend, then Google could be making the big announcement on Tuesday, October 15th, like we mentioned above. Who’s excited about what they see?