Time to get ready for the brand new LG Nexus 5 and Android 4.4 KitKat. It’s finally official as Google just started sending out invitations for an October 24th event. It looks like we’ll be “having a night out with Google Play” on the 24th, as select press have just started confirming the details.

After all the reports and rumors we can now officially confirm that October 24th Google will announce its new mobile OS and the Nexus 5 smartphone. Asking press to join them for fun starting at 7 PM EST in New York City, according to Geek. Which means us on the West Coast will be watching with excitement starting at 4PM next Thursday. 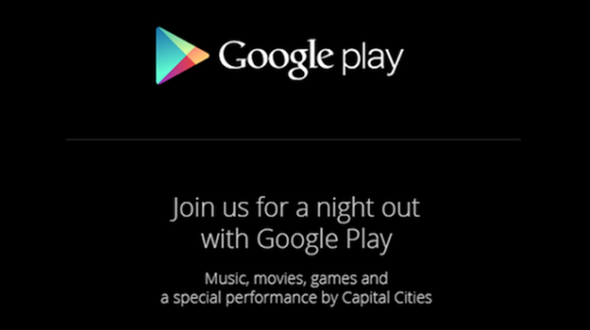 Update: Bad news. Sources are now reporting there will be “No Hardware” at the October 24th event mentioned above. Which seems crazy given all the recent leaks. But hey, maybe that means it’s coming even sooner.

There really isn’t any other details at this point, as Google didn’t say much. It appears the invite are going out as we speak, but are quite limited, not to mention don’t mention anything about Android or the Nexus specifically. Simply stating Google Play. As we all know though, Google Play is the storefront in which the Nexus 5 will be showcased, not to mention appeared right on Google Play last night.

The invite could mean a lot of things, but at this point there’s really no denying that Google will be revealing its brand new flagship smartphone. We can finally put all the rumors to rest, countdowns from the @KitKat Twitter account down, and get ready for next Thursday when we’ll finally get all the details.

As a refresher, we’re expecting a new and improved Android 4.4 KitKat update to arrive on board the Nexus 5, then follow to other Nexus devices shortly. The Nexus 5 sports a 5-inch full 1080p HD IPS display, quad-core Snapdragon 800 processor with 2GB of RAM, and as confirmed last night both a 16 and 32GB model for $349 and $399 respectively.

Specs also include an 8 megapixel camera with Optical Image Stabilization, wireless charging, dual stereo speakers on the bottom and more. This morning we also uncovered a white model will be available, hopefully on launch date, and we’ll know everything soon enough. Get ready for Nexus day on the 24th.