With most Nexus devices released by Google, accessories are hard to come by. The Nexus 5 was no different and when announced back at the end of October we received work that a few neat accessories would be available, but they never actually arrived, until today.

Starting this afternoon Google has just dropped a slew of options and accessories to the Google Play Store for those who are lucky enough to own the Nexus 5. The device is still sold out with extreme shipping delays, but today four fancy and official Google-designed cases are available to purchase, then we have two flip cover cases, followed by an official Nexus 5 wireless charger. Read on for full details. 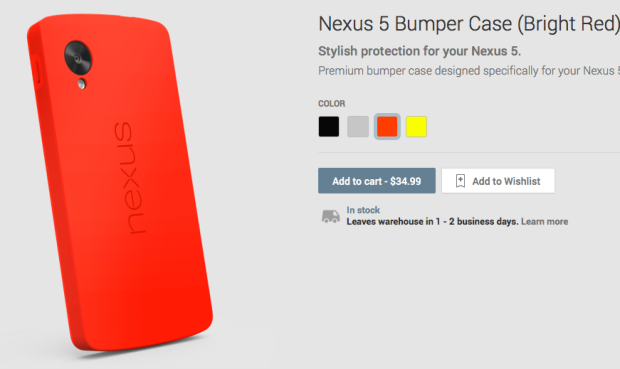 When released, the Nexus 5 had the same four TPU cases listed on the Play Store, sadly Google didn’t make them available. Listing them with nothing but “coming soon” on the order page, we had no idea when they’d arrive. This morning two of the four colors are available, for whatever reason, and we’re expecting the others to arrive soon. You can get an official TPU soft plastic case in Bright Red or Bright Yellow right now. And hopefully the grey and black options arrive soon.

Sadly the prices aren’t low, and Google wants $35 for the TPU case,  and $49 for the Wireless Charging pad. The cases are certainly pricey considering other options from Amazon and elsewhere, but the Nexus Charger should be a great option for many looking to utilize the built-in wireless charging features of the Nexus 5 and 7. 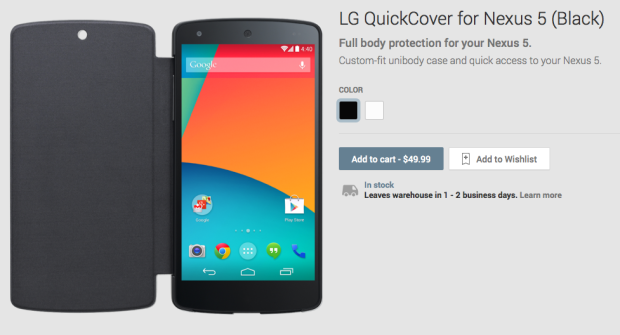 And finally, as shown above, Google also has some Quick Cover smart cases for the smartphone. $49 for the Quick Cover cases is a steep price as well, and they’re offered in both white and black color options. Offering complete protection for the device, and the display, Quick Cases are likely to sell out fast.

This is the first time we’ve received accessories so quick after release on a Nexus device, but many will still be waiting for those other colors to come in, or opt for less expensive options by other means. As a reminder, the Wireless Charging Pad works with the Nexus 4, Nexus 5, and the new 2013 Nexus 7. Get them today before they’re all sold out.