A new rumor has emerged suggesting Google could be looking to offer some customization options for the Nexus 5, and possibly even other upcoming devices like the rumored Nexus 6 or Nexus 8 tablet. Multiple new screenshots have leaked suggesting customizable cases and wallpapers are coming to the Nexus program.

It’s being called the Google Workshop for now, according to leaks, which is a section inside the Google Play Store where buyers will be able to completely customize cases, wallpapers and more for the Nexus 5 smartphone.

According to AndroidPolice, who states the images below came right from a beta version of the Google Play Store, users will soon have a lot of options when it comes to accessories, cases, and customization. Google’s previous Nexus devices all had a bad track record of offering cases or covers, so times could finally be changing. 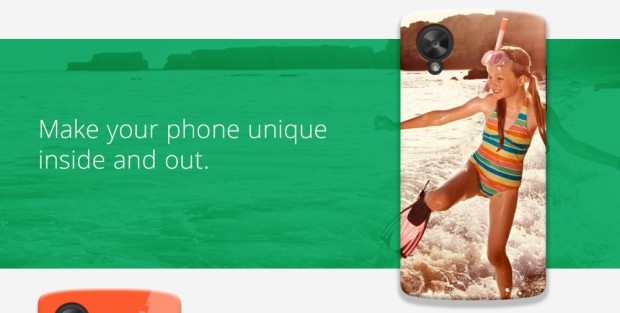 The first company to truly offer an array of customization features for a smartphone was Motorola with the Moto X last year. Delivering a device that users could pick over 18 different rear colors for, custom accent colors, engravings, and even wood backs like Walnut or Bamboo. While Google won’t be going to this extreme, this is certainly a step in the right direction.

The images above and below come from a new Google Workshop on the Play Store where you’ll be doing all the customization. The details aren’t fully known yet, or confirmed, but things look pretty official from what we’re seeing thus far.

The report suggests there will be a Maps and Moments selection. Where users can select pre-set locations, or somewhere on Google Maps and print unique images, maps, or scenes from a location in an array of colors. Then of course there’s those more personal options. Moments will let the buyer upload photos, choose from a list of Google-curated photos, and more.

Once the user selects a custom case option, they can make a matching wallpaper or live wallpaper to go with it. Pretty neat idea, right? Images can be customized, tweaked with filters, or there’s even an option to add text for a neat message and more. It appears as if Google wants to allow for tons of customization, while still limiting what all the user does to these cases. Of course, they’ll have to manufacturer them in a timely fashion and ship them to buyers.

So far, these are all the details that have been revealed. As we stated above, Google’s never been that great with accessories for its Nexus devices, and this could be the first step in changing that.

With all that being said, the current Nexus 5 cases certainly aren’t cheap for a standard TPU case, so most likely these will be pretty expensive if the Google Workshop ever gets the green light and becomes a real product. There’s no additional details, pricing, or release date in sight, but we’ll be on the lookout for additional information.