Following the biggest leak and pile of details regarding Google’s new Nexus 5 smartphone yesterday, this weekend we have something even better. A crystal clear 7 minute hands-on video has just been released, fully revealing the Nexus 5 ahead of the rumored October 15th announcement date.

Complete with Android 4.4 “KeyLimePie” which was the codename before Google’s deal with KitKat, we’re getting our best look yet at not only Google’s latest version of Android, but of the new LG Nexus 5 device. 7 minutes of joy can be seen in the video below for those wanting more details regarding the next Nexus smartphone. 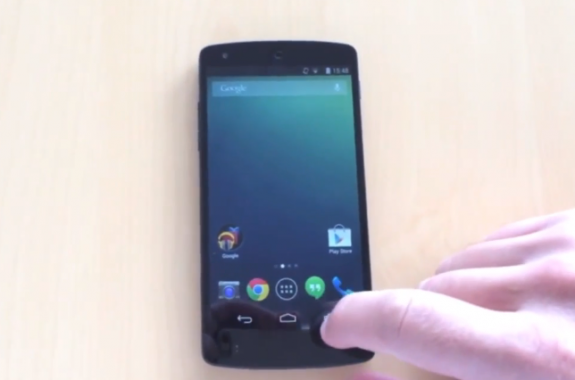 The device appears to be a rather early prototype of Google’s Nexus 5 smartphone. So early in fact, that we don’t have the “Nexus” branding on back as seen in almost all previous leaks, not to mention the version of Android 4.4 on board is quite old too. It still says Key Lime Pie instead of KitKat, and you’ll notice hardly any changes in comparison to the leaks earlier this week.

We’re expecting a brand new launcher with new icons, translucent on-screen navigation menu bars, and even a see-though notification bar at the top. However, none of those are present in this leak provided this fine Saturday afternoon. The bottom bar is still black, and we’re likely looking at an early build of Android 4.4 here. Without further ado, here’s the leaked video.

If you’ve been waiting for more details regarding Google and LG’s Nexus 5 smartphone, this should give you plenty. Being our best look at the hardware yet this leak is welcomed, but we don’t have any additional specs or details being confirmed here. It’s basically just eye candy for now. The flat matte black look is quite pleasing, and will pair nicely with the Nexus 7 released earlier this year.

The messaging app is missing, which confirms early reports that Google Hangouts will integrate and replace the previous SMS application. We still seeing the gallery app here, which was also missing in the latest leaks from yesterday. An app called GEL is included, which is the new “Google Experience Launcher” that will give Android 4.4 KitKat a lot of its signature look.

If the new launcher follows previous features of Android recently changed by Google, we could see it arrive in the Play Store to Nexify any device, just like Google’s done with the stock Keyboard, Google Search, Calendar and more. Last but not least the device is rocking 16GB of internal storage. Rumor has it October 15th Google will release Android 4.4 KitKat, and along with it a 16 and 32GB version of their new Nexus 5 smartphone.