The Nexus 5 release date could come on Friday November 1st following an October 31st announcement, according to new information from a well-known leaker.

The Nexus 5 release has been rumored for several dates in October, and now it looks like it might come on November 1st, the same day Apple’s iPad Air arrives in retail stores.

Google already pushed the Nexus 5 to the Google Play store last week, but that mistake was quickly rectified as Google pulled the listing and put the Nexus 4 back online in its place. This past week Google also started taking Nexus 4 orders again for some users, but the device is now out of stock.

Rumors suggest Google is planning a Halloween launch event for the Nexus 5, which would tie into the Android 4.4 KitKat update. The new version of Android that we expect will debut on the Nexus 5 is nicknamed KitKat, in a partnership with the candy bar of the same name. 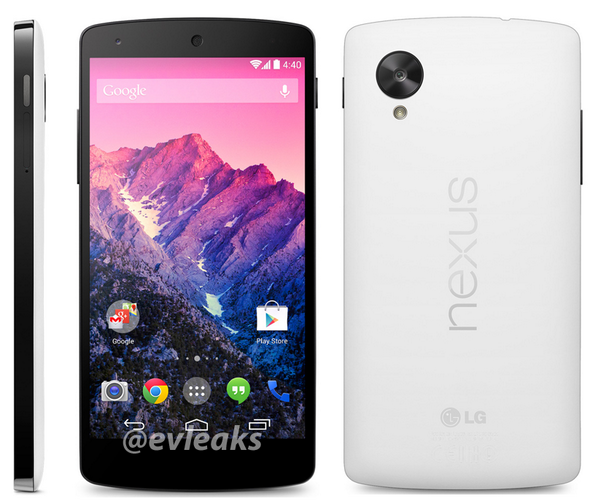 The Nexus 5 release date should arrive in less than a week according to a new leak.

The Nexus 5 release date is possible on November 1st, and it could come in white and black, according to a new tweet by @evleaks on Sunday afternoon.

In the tweet, the famed leaker simply states, “In white. 11/1.”, with the Nexus 5 press render shown in the image above.

This source is a well-known leaker of industry plans especially for Android devices. This is the same device as he shared on Saturday in black. The two devices show a mountain range though the renders do not show the same time.

The Nexus 5 release date is close as companies are already shipping cases for the new device. The Nexus 5 comes with a 5-inch display and a 1920 x 1080 resolution. This new Nexus will come with a Snapdragon 800 processor, 2GB of RAM and a 2,300mAh battery according to multiple leaks.

We don’t have the full Nexus 5 dimensions yet, but the Nexus 5 case in the video below is close enough to show what the Nexus 5 size should look like next to the Samsung Galaxy S4, Note 3, Nexus 4 and iPhone 5.

Google may immediately start taking orders for the Nexus 5 on November 1st and based on past launches could offer two-day shipping which will place the Nexus 5 in the hands of shoppers as soon as Monday November 4th.

Google may also announce a new Nexus 10 tablet, a smart watch and or some type of connected device, but it’s not clear if all of these gadgets are ready for a reveal.