If you’re someone who’s still deciding on which one to get, we’ve decided to give you a direct comparison between the two devices, as explain some of the bigger differences between the Nexus 5 and the iPhone 5s. We’ll also talk about some of the shared qualities between the two as well, which might make the decision process even more challenging, but hopefully we can help you make the right decision for you. 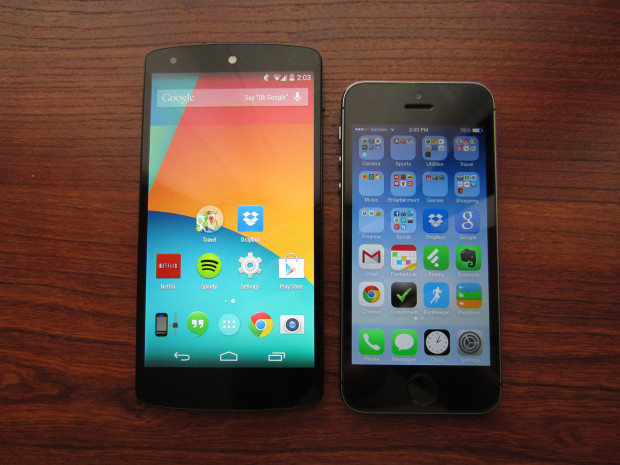 However, the Nexus 5 really isn’t all that much bigger than the iPhone 5s. Photos will make you think otherwise, but holding a Nexus 5 in your hand will most likely have you questioning how Google managed to fit a 5-inch display in such a small handset. 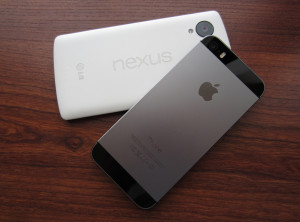 Speed is pretty important; apps need to open quickly and navigating around your device should be smooth and snappy. As far as pure numbers go, the Nexus 5 absolutely demolishes the iPhone 5s with its quad-core processor clocked at 2.3GHz, compared to the iPhone 5s’s dual-core 1.3GHz A7 chip.

Of course, though specs aren’t everything, and you’d be surprised how fast the iPhone 5s, thanks to its extremely-optimized iOS 7 operating system. If you’re a numbers guy and need the phone with the fastest processor, go with the Nexus 5, but you likely won’t be able to tell a difference in real-world speed between the two handsets. This one’s a tie for the most part.

The Nexus 5 runs Android 4.4 KitKat, while the iPhone 5s runs iOS 7. Obviously, these are two completely different operating systems, and your decision will most likely come down to which platform you prefer. These days, it’s all about the ecosystem and what platform offers the best apps and overall better experience. Ultimately, it comes down to whether you like Android or iOS, rather than the decision coming down to which specific phone you like better.

But whichever platform you pick, you have an excellent phone waiting for you to buy that will give you the best possible experience on its respective operating system.

The camera is one of those features that many users are picky about. A lot of people want a phone that can replace their traditional point-and-shoot cameras, and from our experience, the iPhone 5s can do exactly that. Since the Nexus 5 was just recently launched, we haven’t gotten the chance to thoroughly test out the camera, but from our experiences so far, the Nexus 5 is capable of delivering some great photos and video.

However, the iPhone 5s comes with Burst Mode that can shoot 10 photos per second, and a Slo-Mo feature that records video at 120fps. These features alone can be the icing on the cake for someone looking for a handset with a good camera. 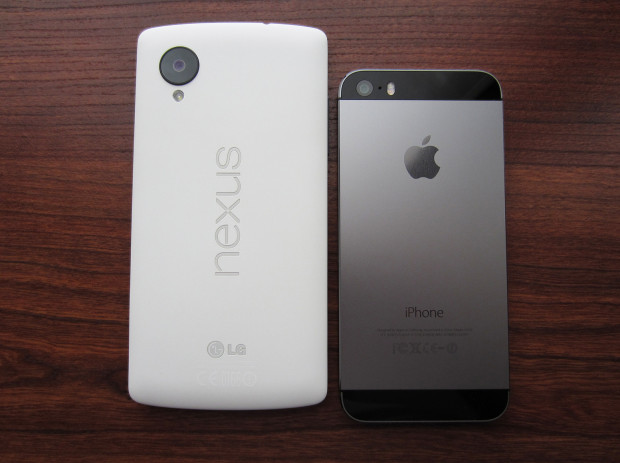 Battery life is one of those things that no one is ever happy with. With that said, you might be pleased to know that the battery life on both the Nexus 5 and the iPhone 5s are pretty decent. According to Apple, you’ll be able to get 10 hours worth of LTE surfing time, while Google says that the Nexus 5 will last seven hours on LTE. Of course, your mileage will vary, and each user will have their own experiences as far battery life goes, but it’s usually a safe bet to knock a couple hours off of what companies give you as far as battery life numbers.

Here’s where boys become men and girls become women. When it comes down to it, the cost of a device is the ultimate deciding factor, and difference in price between the Nexus 5 and the iPhone 5s is substantial. Off-contract, the Nexus 5 starts at $349, while the iPhone 5s starts at $649. Fortunately, you can get the iPhone 5s on-contract starting at $199. The Nexus 5, on the other hand, can only be bought off-contract right now. 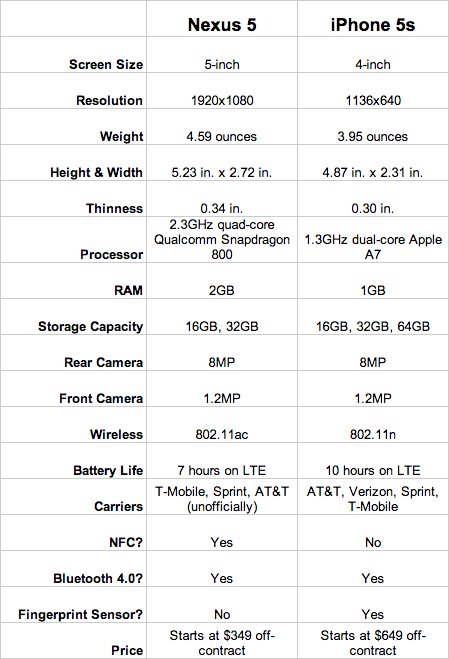 Above is a quick-to-read table of the differences between the Nexus 5 and iPhone 5s — a good resource for those who rely on specs and features when choosing the right phone. In the end, though, you’ll also have to consider the platform and the app ecosystem that surrounds it, as a phone is only as good as the apps that comes with it.