Earlier this week Google officially announced the highly anticipated and much needed Android 5.1 Lollipop update for many key Nexus smartphones and tablets. For now it’s rolling out to the Nexus 5, Nexus 6, Nexus 7 and Nexus 10, with the 2013 Nexus 7 and more devices set to receive the latest software in the coming days. Here we’re taking a lot at how well Android 5.1 runs on the Nexus 6.

Google first debuted Android 5.0 Lollipop in October, but quickly released both an Android 5.0.1 and 5.0.2 software update aimed at fixing bugs and improving performance, but those didn’t address all users problems. The original Nexus 7 suffered the most problems, and the new Nexus 6 had a few of its own. However, this update should fix most users complaints.

Read: How to Install Android 5.1 Lollipop on the Nexus 6

Android 5.1 Lollipop is a major software update to the initial Android 5.0 Lollipop software that arrived back in October, and is set to fix tons of bugs, secure a memory leak issue, improve performance and battery life, and is an overall maintenance update that is severely needed following countless complaints on an array of devices. Read on for our initial impressions after updating the Nexus 6 to Android 5.1 Lollipop.

Google’s first smartphone to run the new Android 5.0 Lollipop was the Nexus 6, and then the update quickly arrived for all Nexus 4, Nexus 5, and Nexus tablet owners. However, one thing that wasn’t in the changelog of new features and improvements was all the bugs users have been experiencing. The Nexus 6 quickly received Android 5.0.1 to fix some, but that wasn’t enough.

With Google’s latest release Android received a complete visual overhaul with tons of animations, colors, effects, better battery life, a notification pulldown bar redesigns and even more tweaks to the lockscreen and software under the hood, like ART.

Android 5.0 Lollipop is one of the biggest changes to Android in a long, long time, but sadly it wasn’t a good move for some. The original Nexus 7 has absolutely been plagued with problems since getting Lollipop. Users have flooded our inbox, forums all over the web, Google’s support pages and more expressing frustration over all the problems. Not to mention users with the LG G3, Galaxy S5, HTC One M8 and more have all been complaining about issues since the 5.0 update started arriving from other manufacturers. Most of which were on Google’s side, and have now been fixed.

Google’s Motorola-made Nexus 6 went through tons of testing before being released, but was obviously rushed as it had countless issues. Many owners reported app crashes, freezing, video playback errors, and just general buggy and unstable performance. Battery life was up and down, and there were often device reboots for no apparent reason. Later we found out there was a major memory leak causing many of the instabilities, and that was one of the biggest fixes with this release.

So far my initial impressions of Android 5.1 Lollipop on the Nexus 6 are extremely positive. It was already running rather smooth, but now things are better than ever. There is actually a noticeable speed and performance increase (not just a placebo) and we’re hearing from others that battery life got a huge bump too, but we’ll need more than a day to test that. So far everything is buttery smooth, stable, and looks wonderful.

While Google announced Android 5.1 earlier this week, we’ve yet to see updates arrive through the typical over-the-air update fashion. This is because Google does a very slow, gradual, and staggered rollout to make sure there are no show-stopping bugs in the software release.

That said, Google has released the factory images for the Android 5.1 update for the Nexus 5, Nexus 6, Nexus 7, and Nexus 10. And there’s a how to at the top of the page. We didn’t do a factory install here, and instead received the over-the-air update and installed that. This is the approach almost all owners will take, vs wiping out and flashing factory images, so this will best represent how most owners devices will be updated, and how they’ll perform after the Android 5.1 upgrade. 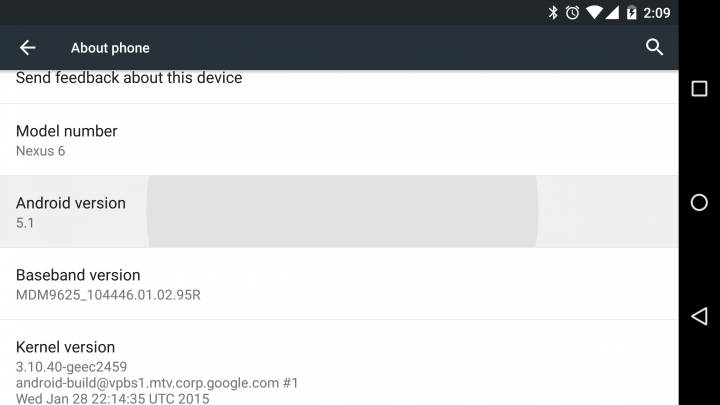 Yesterday Sprint confirmed the Nexus 6 Android 5.1 Lollipop update was set to start rolling out, and we’ve received a few (not many) comments that owners have already received the over the air update. Google takes its sweet time pushing updates, vs Apple’s send to everyone in a single day approach, so most Nexus 6 owners are likely still waiting for the update to arrive.

For now users can expect the Nexus 6 Android 5.1 update to arrive as an OTA update in the next few days, and continue arriving over the next few weeks. If you don’t get it today, or tomorrow, be patient as it will arrive soon enough. That, or flash it manually with the how to we mentioned at the top of the page. You can also get the update files and sideload the actual update, with a little know-how. We’d recommend most users simply wait for the update to arrive via a notification on their device, and update through the official way.

Oh, and there’s still no official “silent” option in sound settings. The new Do Not Disturb has been slightly redesigned and is easier to understand, but there’s no silent option. Just vibrate, or killing everything by setting notifications to “None”, which isn’t our favorite method ever.

Fast, smooth, stable, and impressive. The Nexus 6 is an extremely powerful phone and even with the bugs and issues in the early Android 5.0 release didn’t slow it down too much, but now that Google’s refined everything with Android 5.1, this device flies. Everything is buttery smooth, fast, fluid, and appears to be running like a well oiled machine.

I’m actually pleasantly surprised by the noticeable increase in performance and general smooth operations. Not to say it was awful before, but it is actually noticeably better. One seasoned Android Developer took to Google+ to explain a few of the changes made to the Nexus 6 with Android 5.1, and it points out a few extremely good reasons for why the device runs so much faster, while getting better battery life at the same time.

He explains Google’s changes were for the better, and what exactly it all does, but it’s quite technical. Just know that Android 5.1 should make the Nexus 6 perform better than ever, while also getting better battery life at the same time.

So far I’ve played games like Clash of Clans, Asphalt 8, and UNO, as well as ran Facebook, Instagram, placed calls, sent text messages with Textra, and used nearly every social network, all without fail. This morning I was streaming Sling TV with my Nexus 6 catching up on the latest news around the NFL on ESPN with the Nexus 6, and it was streaming live TV extremely fast and smooth. I’ve had absolutely zero problems since updating to Android 5.1 Lollipop, and will update once anything surfaces worth noting.

In Android 5.0 Lollipop Google confirmed there was a “memory leak” problem that was causing erratic behavior in many apps. Apps would crash, freeze, or just get laggy. This happened extremely quick for some, or would take a few days to finally start happening. A reboot would fix this temporarily, but not for long. As far as we know the memory leak problem was fixed with this update, and from our initial impressions the Nexus 6 on Android 5.1 is running smooth as butter. Yes, it’s finally silky smooth like it should be. However, after a few days we’ll know for sure.

Overall the Nexus 6 Android 5.1 Lollipop battery life should be much improved. The changes made should make the quad-core processor run more efficient, less when not needed, and handle tasks in a different fashion. Overnight the battery drain was extremely low, and this morning my Nexus 6 appeared to handle all my games and Sling TV streaming better than weeks prior.

So far battery life seems better, but with less than 24 hours to test so far it’s hard to accurately gauge just how much better it is. We’ll post a full review of the latest software in the coming days. Google put in tons of effort with Android 5.0 (and 5.1) to improve battery life, so this will be a key area we look at moving forward. So far things are looking very promising.

Connectivity is a major area of concern after any update, especially a large one like this. And while the Nexus 6 didn’t have too many issues, we’re not experiencing any either, so that’s good. I’ve used my Nexus 6 in the car, and connected to the JAMBOX speaker with no problems. WiFi, Bluetooth and more all work excellent. Update without worry.

Shown above is one of the many new features of Android 5.1 Lollipop, which is the improved notification pulldown bar. To take things further, Google’s improved the quick settings. Right inside the pulldown bar you can tap the small arrows and switch, search, and connect to Wi-Fi in seconds, rather than fumbling through settings. The same works for Bluetooth for easy pairing. They’ve even added little animations to the icons, tap the signal bars icon for a quick glance at data usage, and more. It’s a nice touch, and is working great here on this Nexus 6.

With Android 5.1 built for any device, including Android One budget phones for emerging markets, there’s no reason the Nexus 6 and its quad-core processor can’t run it smoothly. This is why some of the performance issues were surprising when it first launched, but they’ve all been fixed in Android 5.1 Lollipop. The phone doesn’t just feel faster, it is faster. Apps open quickly, things are smooth, and it is a top end experience buyers expect. Everything still runs smoothly including the starting and switching apps. So far overall speed, performance and reliability is great since updating.

In short, YES! The initial Android 5.0 Lollipop update caused a lot of problems and left many owners angry and frustrated, and the Nexus 6 launched with plenty of those bugs and issues, but they’re all gone now. Sure, there will still be bugs here and there, some may have issues after updating, and we recommend a full wipe and completely fresh install for the best results.

If you are still on Android 5.0 on your Nexus 6 and didn’t get 5.0.1, expect a few updates to be arriving soon. Android 5.0.1 didn’t fix much, but this new Android 5.1 release is set to deliver you the best Nexus 6 experience possible.

At this point we see no reason to warn users against accepting the Android 5.1 Lollipop update notification once it arrives, and if you’d rather not wait, the steps at the top of the page can get you this latest software release right now. How is Android 5.1 on your device? Any device. Drop us a comment below.