Sometime in December Asus will release its new Nexus 7 dock according to a SlashGear report.

The new Nexus 7 dock will charge the Nexus 7 via the dock’s microUSB port as well as provide audio out for the device. The Nexus 7 sits in the dock in landscape mode, and charge the device through metal pins that connect to the metal dots on the back of the tablet.

The dock requires power for audio out, and the Nexus 7 needs to run Android 4.2 Jelly Bean for the dock to work. 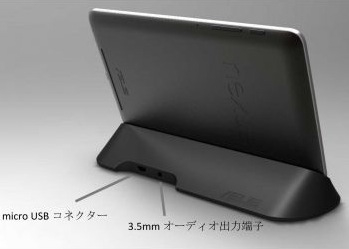 The Nexus 7 dock was available for reservation once before around the release of the 7-inch Android tablet. During that brief period the dock had a list price of $49.99. The current leak says the dock will cost 3,480 Yen in Japan which is about $40 USD. The website that listed the device said it will release in December 2012, which means it could reach the U.S. anytime this month.

Based on Asus’ track record with the Nexus 7, if there is a big demand for the Nexus 7 dock upon release it will be hard to get one before Christmas or the end of the year. When the Nexus 7 first came out it was hard to find the device anywhere for several weeks. The device is easy to buy now, however, with Google Play listing the device (including the 3G model) as shipping in 3-5 business days.

The official Nexus 7 dock looks like a great accessory for keeping the device on a table for easy access or for watching movies. There are other third-party docks available for the device, but this is the only official option that uses the metal pins and holds the device in landscape mode. Other docks connect to the microUSB of the Nexus 7 and hold the tablet in portait mode which isn’t as good for watching movies or viewing websites.