The Nexus 7 LTE release date is imminent given that O2 in the United Kingdom will begin taking pre-orders for the device starting tomorrow ahead of a September 13th release date and given that the device is reportedly already being sold through a retailer in Germany.

In late July, Google introduced the new Nexus 7, a device that replaced the older Nexus 7 with a handful of upgrades including an improved 7-inch display, new lightweight design, rear 5MP camera, and 4G LTE data speeds. While the Wi-Fi Nexus 7 has been out on shelves since late July, the Nexus 7 LTE has yet to make it to shelves, leaving consumers around the world looking for answers.

O2 UK announced that it will be taking pre-orders for the Nexus 7 LTE ahead of its release date on September 13th. That’s the first concrete date that we’ve seen emerge and it’s possible that it will apply to other countries as well, including the United States.

Those who can’t wait can seemingly snag a Nexus 7 LTE early as it appears that German retailer MediaMarkt is currently selling an in-stock Nexus 7 LTE. In fact, users on Reddit are reporting that they were able to get an LTE model through MediaMarkt ahead of the device’s release date. It’s not clear how much stock, if any, is left at the retailer but it has certainly sold at least a couple of LTE-enabled Nexus 7 models ahead of schedule. 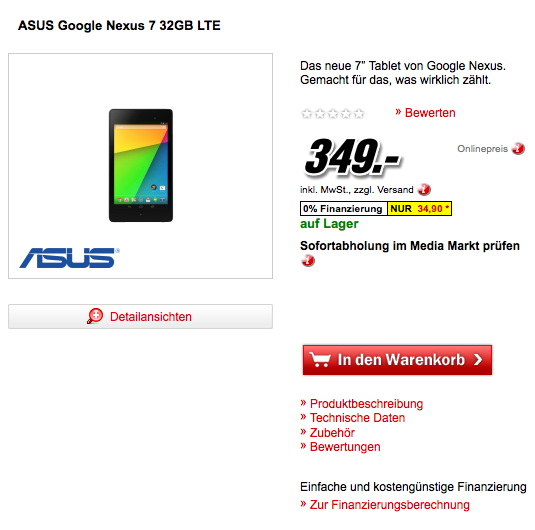 At least one retailer is already selling the Nexus 7 LTE.

What this could mean is that the Nexus 7 LTE will be available in at least some retail stores, something that has remained unconfirmed alongside its release date.

In the United States, a host of retailers currently carry the Wi-Fi only Nexus 7 and it’s possible that we could see at least a few of those join the Google Play Store.