What happens when you drop the Nexus 7 and the iPad?

We don’t recommend tossing your tablets to the ground or dropping them in water, and thankfully you don’t need to.

Which popular tablet handles drops and water the best?

SquareTrade tortured the Nexus 7 and the iPad with drops from chest height, off a bench and into a tub of water to see which survived better, and you can watch the test in the video below.

Surprisingly the Nexus 7 is a very resilient tablet for the $199 starting price.

SquareTrade offers gadget warranties to cover mishaps like those shown in the video. Sure, the Nexus 7 still worked after a bath, but I wouldn’t count on it running after every immersion in water. 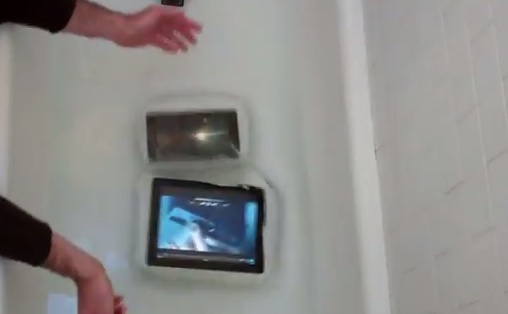 What happens when you drop the ipad and the Nexus 7 in water and on concrete?

The standard warranties for both of these devices do not cover water immersion and won’t cover a screen damaged from a fall. For that you’ll need an extended warranty or insurance.

We rounded up the top iPad insurance options when the new iPad launched earlier this year and still feel that SquareTrade offers one of the best values for protecting the iPad and other gadgets from an early death due to water or drops.

Pricing out a two year warranty with protection for drops, spills and other accidents hits $29.99 for two years of protection for the $199 Google Nexus 7. I’m not as quick to suggest a warranty on a $200 tablet as I am on a $500 tablet, but if you plan to share the Nexus 7 with kids or are worried about accidental damage you can check out the warranty offerings from SquareTrade.