This week after nearly 5 months without a single update Google finally delivered the much needed Nexus 9 Android 5.1.1 Lollipop update with a collection of bug fixes and performance improvements aimed at fixing the tablet. After spending a few days with Android 5.1.1 Lollipop on the Nexus 9, here’s our initial thoughts.

Google’s Android 5.1.1 Lollipop update is currently rolling out to the Nexus 7, and now the newer Nexus 9 tablet as an over the air update, or you can follow the guide below to install the latest software right now.

Read: How to Install Android 5.1.1 Lollipop on the Nexus 9

With this update comes a number of fixes for Android 5.1 problems, as well as fixes for the original 5.0 release. Like battery life issues, app crashes, and random reboots. You can check to see if your Nexus 9 sees the update, and if so you can download and install it fairly quickly, but before you do — here is a look at our initial impressions after more than a few days with Android 5.1.1 on the Nexus 9.

The initial Android 5.0 Lollipop update was riddled with little bugs and issues that were plaguing all users, and that includes those with the Nexus 9. Apps were crashing, reboots, slow performance, gaming was oddly terrible on the Nexus 9, and it was just an overall sluggish device. Something that was unexpected for Google’s new flagship iPad-like 8.9-inch Nexus tablet.

Now that I’ve spend two or three nights using the Nexus 9 on Google’s latest version of Android 5.1.1 Lollipop, here’s a breakdown of what owners can expect and if the update is worth installing. In short, yes, it absolutely is 100% worth installing and has severely improved my Nexus 9 experience.

Google actually announced the Nexus 9 Android 5.1.1 Lollipop update in the middle of last week, on May 7th, but it didn’t arrive for anyone. At least no reports of it surfaced. Then on Monday after a few days of waiting the over the air update finally surfaced, and the factory images were posted to Google’s servers, allowing users to download and install it now, vs waiting for the update.

The update is fairly large in size, as it will be taking users with a Nexus 9 from Android 5.0.1 (or 5.0.2) to the latest Android 5.1.1 Lollipop release. It has a lot of new features, tweaks, and software improvements to make the experience better. 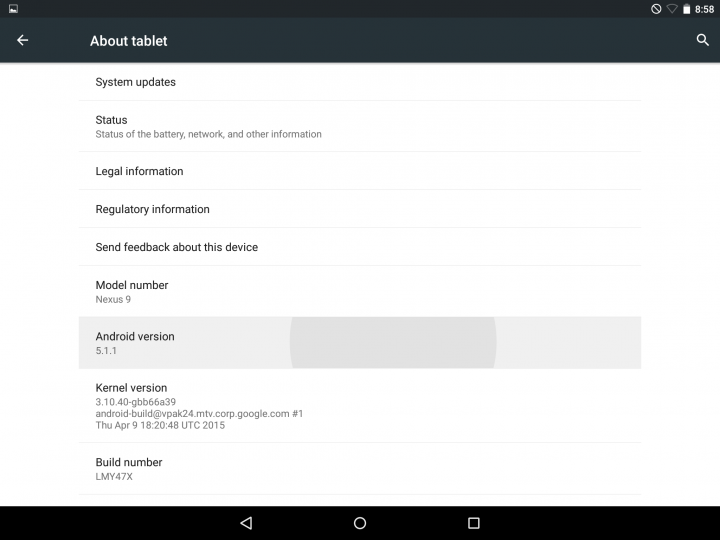 Users can head into settings > about tablet > and check for updates now to try and manually get the update, otherwise it should arrive over the air and in your notification bar in the next few days. You can always try the manual way to update, using our link at the top of the page.

For us, we received the over the air update, and it was a smooth experience. It took a few minutes to download, then a few to reboot and install on my Nexus 9. Within about 10 minutes I was back up and running with a completely improved device. One that’s faster, smooth, and seems a bit more stable. But more on that below.

Fast, smooth, stable, and impressive. The Nexus 9 is an extremely powerful tablet but the initial Lollipop release wasn’t nearly as smooth on this powerful 64-bit NVIDIA Denver powered device, but now that Google’s refined everything with Android 5.1.1, this device flies. Everything is buttery smooth, fast, fluid, and appears to be running like a well oiled machine.

I’m actually pleasantly surprised by the noticeable increase in performance and general smooth operations. The Nexus 9 still seems to have a little stutter here and there, which it shouldn’t, but it is actually noticeably better. The update should not only improve the speed and perfomance, but there should be less bugs, less app crashes, and improved battery life as well.

Lately a lot of Android 5.x updates have caused issues for many owners, with bugs plaguing almost each release. Our Nexus 9 being updated over the air from 5.0.2 to Android 5.1.1 Lollipop has no issues. I’ve yet to see any apps crash, or any major problems that would have me not recommend users upgrade. It’s fast, smooth, and seems quite nice.

So far I’ve played games like Clash of Clans, Gunner Z, and UNO, as well as ran Facebook, Instagram, Robird for Twitter, browsed the web, and used nearly every social network, all without fail. Yesterday I was streaming Sling TV with my Nexus 9 catching up on the latest news around the NBA on ESPN and it was streaming live TV extremely fast and smooth. I’ve had absolutely zero problems since updating to Android 5.1.1 Lollipop, and will update once anything surfaces worth noting.

In Android 5.0 Lollipop Google confirmed there was a “memory leak” problem that was causing erratic behavior in many apps. Apps would crash, freeze, or just get laggy. This happened extremely quick for some, or would take a few days to finally start happening. A reboot would fix this temporarily, but not for long. As far as we know the memory leak problem was fixed with this update, and from our initial impressions the Nexus 9 on Android 5.1.1 is running smooth as butter. Yes, it’s finally silky smooth like it should be. However, after a few more days we’ll know for sure.

Overall the Nexus 9 Android 5.1.1 Lollipop battery life should be much improved. At least according to Google. The changes made should make the dual-core 64-bit Denver processor run more efficient, use less power when not needed, and handle tasks in a different fashion. Overnight the battery drain was somewhat low, and this morning my Nexus 9 appeared to handle all my games and Sling TV streaming better than weeks prior. Overnight I did lose about 9 perfect, and woke up with 91% when it was full before bed.

So far battery life seems decently better, but with only a few days to test it so far, it’s hard to accurately gauge just how much better it is. We’ll post a full review of the latest software in the coming days. Google put in tons of effort with Android 5.0 (and 5.1, and 5.1.1) to improve battery life, so this will be a key area we look at moving forward. So far things are looking very promising.

Connectivity is a major area of concern after any update, especially a large one like this. And while the Nexus 9 didn’t have too many issues, we’re not experiencing any either, so that’s good. I’ve used my Nexus 9 around the house, at Starbucks, a doctors office, and connected to the JAMBOX speaker with no problems. WiFi, Bluetooth and more all work excellent. Update without worry. 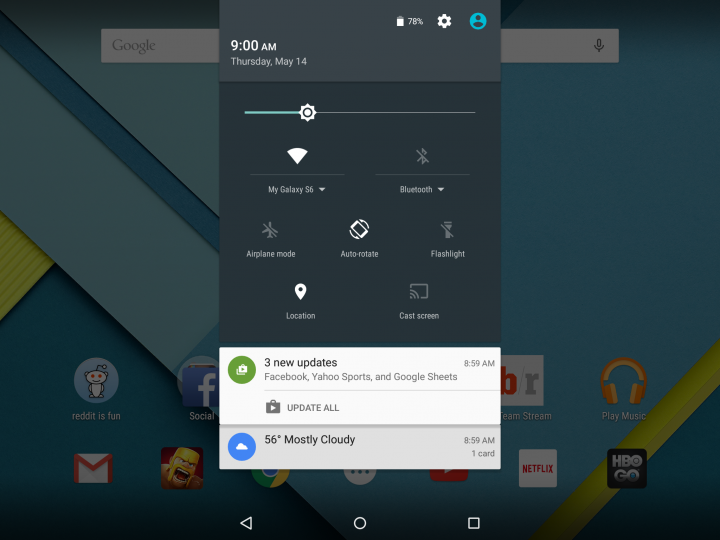 Shown above is one of the many new features of Android 5.1 Lollipop, which is the improved notification pulldown bar. To take things further, Google’s improved the quick settings. Right inside the pulldown bar you can tap the small arrows and switch, search, and connect to Wi-Fi in seconds, rather than fumbling through settings. The same works for Bluetooth for easy pairing. They’ve even added little animations to the icons, tap the signal bars icon for a quick glance at data usage, and more. It’s a nice touch, and is working great here on this Nexus 9.

With Android 5.1.1 built for any device, including Android One budget phones for emerging markets, there’s no reason the Nexus 9 and its powerful 64-bit NVIDIA processor can’t run it smoothly. This is why some of the performance issues were surprising when it first launched, but they’ve all been fixed in Android 5.1.1 Lollipop. At lest from what we’re seeing. The tablet doesn’t just feel faster, it is faster. Apps open quickly, things are smooth, and it is a top end experience buyers expect. Everything still runs smoothly including the starting and switching apps. So far overall speed, performance and reliability is great since updating. I’ve notice a big increase in gaming performance and multi-tasking, two things the Nexus 9 seemed to struggle with before.

Even though Android 5.1.1 is a bug fix update, there is a chance that there can be other issues and bugs hidden inside the update. At this point I have not observed any new Android 5.1.1 bugs or problems on the Nexus 9. It is still early and many times these don’t appear until we spend a few days poking around in apps or areas that we don’t use every single day.

So far I haven’t experienced app crashing or random reboots, which may be due to the fix for the memory leak bug on Android 5.1.1. Things are looking up for Google’s Nexus 9 tablet, and Lollipop as a whole.

You can check out the Google Nexus Help forum for more information and to see if other users report problems with Android 5.1.1 Lollipop.

In short, YES! The initial Android 5.0 Lollipop release caused a lot of problems for devices that received updates to it, and the Nexus 9 launched with some of those on board, then was the last to get an update. Sure, there will still be bugs here and there, and some may have issues after updating, but we recommend a full wipe and completely fresh install for the best results.

If you are still on Android 5.0.1 on your Nexus 9 and didn’t get 5.0.2, expect a few updates to be arriving soon. Android 5.0.2 didn’t fix anything, but this new Android 5.1.1 release is set to deliver you the best Nexus 9 experience possible.

At this point we see no reason to warn users against accepting the Android 5.1.1 Lollipop update notification once it arrives, and if you’d rather not wait, the steps at the top of the page can get you this latest software release right now. How is Android 5.1.1 Lollipop on your device? Drop us a comment below.