Android tablets haven’t exactly been scarce these last few years. There are plenty of tablets – mainly those made by Samsung – that offer a moderately decent Android user experience and the best in hardware. Lately though, Google’s Nexus line of devices has been a bit light on tablets. It’s for that reason that the newly announced Nexus 9 important.

The Nexus 9 is the newly announced way for users to experience the Android Lollipop operating system. Nexus devices don’t come with a skin and extra options. On board is Android as it was meant to be used by Google. Updates arrive when Google releases them, not when some other company decides they should be released.

In this way and hardware-wise the Nexus 9 and Microsoft Surface 2 tablet are siblings. That is, they’re both high-end tablets aimed at those who want a software experience that hasn’t been tampered with and hardware features that users just don’t get anywhere else. They’re both uniquely positioned somewhere between being an entertainment tablet and a convenient way to stay productive. Here’s how the Nexus 9 compares to the Surface 2 for those who are on the fence.

The Nexus 9 almost looks like a mix between the design philosophies that gave us the Nexus 5’s look and Motorola’s Nexus 6. On the rear of the tablet is a plastic shell that’s curved along the edges in the same way the Nexus 6 is. The shell is milky white with a rim that combines it and the front of the tablet and display. Interspersed around that metal rim are notices that allow the Nexus 9’s wireless internet and more to work correctly. There’s a rear-facing 8 megapixel camera with flash and the HTC logo. Colors include white, black and beige.

Compared to the Nexus 9 the Surface 2 is less curvy. The rear of the Surface 2 is metal and includes a 5 megapixel-rear facing camera. Only a small plastic edge interrupts the sea of metal on the back of the Surface 2. That, plus there’s a kickstand that extends out from the midway point in the device.

Surface 2’s aren’t button-less. The front black bezel of the Surface 2 is interrupted by a Windows logo that doubles as a Start button. On the sides sit volume buttons, a USB 3.0 port, video out a headphone jack and two speakers. 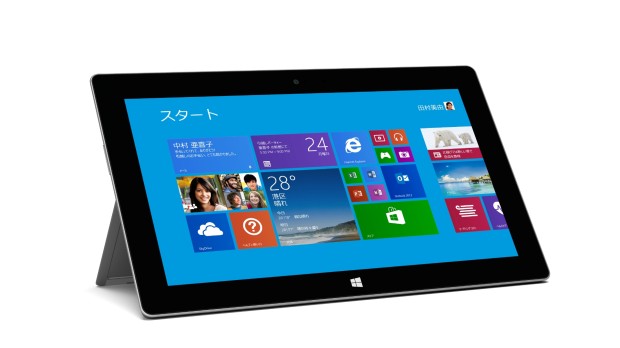 The Surface 2 is nice, but it loses out to the Nexus 9 because of one key feature. That feature is called the BoomSound and the Nexus 9 has it. In other HTC-made devices BoomSound speakers are responsible for some of the best sound ever to be produced by a mobile device. That the Surface 2’s puny speakers are mounted on its side certainly doesn’t help either.

The Nexus 9 is the first high-end Android tablet to come with pure Android in very long time. Fittingly, the Nexus 9’s specifications reflect that.

As one might expect the Nexus 9 is dominated by its display. This IPS LCD display measures 8.9-inches diagonally, putting it right in between an entertainment tablet that’s meant for videos and web browsing, and a large tablet that’s perfect for word processing on the go at the very least. The resolution of the Nexus 9 display is 2048 x 1536p, which is pretty high-up on the quality spectrum.

The entire system is backed by a Nvidia Tegra K1 processor that’s 64 bit with 2GB of RAM. In short, it’s powerful. According to The Verge, the $399 model will include 16GB of storage. 32GB GB and 32GB with mobile internet connectivity options will be available too, though they’ll cost more and be available in different colors down the line.

The Surface 2 is also a beast of tablet, aimed at people who need something between a laptop and a phone. The Surface 2 is dominated by a 16:9 inch 10.6-inch display that has a resolution of 1920 x 1080p. As Microsoft’s cheapest tablet running Windows 8 RT, there’s just 32GB of storage in the Surface 2. Buyers can add more storage with a MicroSD card just like they can with the Nexus 6.

Though the operating system that Microsoft uses in the Surface 2 looks remarkably similar to a full version of Windows 8, it’s actually not. Instead, it runs Windows 8.1 RT, a version custom-built for tablets for battery life. That’s important because the Surface 2 also runs on a NVIDIA Tegra processor, last year’s NVIDIA Tegra 4. There’s 2GB of RAM helping power the Surface 2.

Decent cameras aren’t something tablets are regularly known for having. That shows in the Surface 2. It has just a 5 megapixel camera where the Nexus 9 has an 8 megapixel rear-facing camera with flash. Unless something goes horribly wrong, Nexus 9 buyers can expect pictures that are consistently better than what’s available with the Surface 2.

Earlier I mentioned that both the Surface 2 and the Nexus 9 were productivity machines. That’s absolutely true, but what gets users into productivity mode on both devices are detachable keyboards.

The Surface 2’s Touch Cover and Type Cover accessories add physical or touch keys with a trackpad. The Touch Keyboard starts at $119 and is a bit less accurate than the $129 Type Cover. There’s also a $199 Power Cover for boosting the Surface 2’s battery life beyond 10 hours.

A Bluetooth keyboard with two-position kickstand props up the Nexus 9 so that users can get work done like a typical laptop. Google isn’t offering pricing on the keyboard cover yet, but it already loses to the Surface 2’s covers because it lacks a trackpad.

The Nexus 9 with keyboard accessory.

The Surface 2 doesn’t need a cover to sit up on its own. The aforementioned kickstand lets it sit upright in two different positions with no additional costs. The Surface 2 also includes a full-size USB port that makes it infinitely more expandable with accessories than the Nexus 9. Bluetooth and wireless internet are provided on both devices.

It’s worth noting that the Surface 2 comes with Office 2014 free of charge. This version of Office includes Word, PowerPoint, Outlook and OneNote. Plus, the Desktop interface is still there for easy multitasking even if you can’t install apps like iTunes.

At $399 for a version with 16GB of storage, the Nexus 9 is definitely the cheapest of the two. Unfortunately, for Google the Surface 2 is still the better value since it comes with 32GB of storage for $449 instead of the Nexus 9’s $479. The 32GB LTE Nexus 9 is $599, $79 cheaper than the Surface 2 with 64GB of storage and LTE connectivity. Of course, the extra storage with the latter is crucial.

Ultimately which of these you choose is going to come down to which operating system you like more. Windows 8.1 is pretty robust though the Windows App Store, isn’t all that well-stocked. On the other hand Android Lollipop adds a new multitasking screen that still isn’t as capable for productivity as Windows 8.1 RT.

Google will start taking Nexus 9 pre-orders on October 17th. The Surface 2 is already available for purchase online and in stores nationwide.