Nexus One Owners Need to Upgrade or Go Custom for ICS

I have a couple of friends still rocking the “Google Phone” that Google left behind, the Nexus One. One of them has moved on to Windows Phone, but is still quite bitter that the phone Google said would get all the upgrades isn’t getting Android 4. Google’s Hugo Barra confirmed this way back in October, but many Nexus One owners were hopeful that this was not true.

Why? Why can’t the Nexus One get ICS? According to Hugo Barra, the Nexus One is just too old and Extreme Tech explains this in more detail. The internal memory size and the older Snapdragon processor would pose issues that would cause the phone to run sluggish. 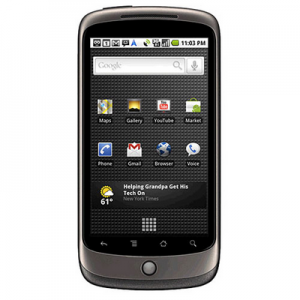 Let’s start with the Snapdragon S1 SoC, which is downright old, having first shipped in 2009. The clock speed is fine, but the chip does less work each clock cycle than newer Qualcomm processors. Of greater concern is the Adreno 200 GPU which is capable of just a fraction of the performance seen in other GPUs. Android 4.0 makes use of hardware acceleration for 2D drawing, so a sluggish GPU could be an issue.

Perhaps the most serious impediment to the Nexus One getting Ice Cream Sandwich is the small storage space. We aren’t talking about user-accessible SD storage, but the internal ROM where apps and the operating system reside. The Nexus One was designed by Google and HTC to have just 512MB of ROM, 190MB of which was dedicated to user apps.

Unfortunately, there are users out there still hanging on to old rumors in hopes that ICS will come to their old phone, eventually.

Both Gabe Cohen, Android Product Manager, and Android User Experience Director Matias Duarte, have confirmed that the Nexus S and Nexus One will definitely be getting an update to Android 4.0. Even better news for wider, existing community of Android phone users is the fact that Google expects most Gingerbread devices to get the update too.

It’s time to move along to another phone or hit up the XDA Community for a ROM that works. Be warned, most people I’ve chatted with that have installed ICS on their Nexus One ended up going back to Gingerbread. I don’t have the Nexus One myself, but if I did, this ROM looks like it’s getting some good support.