Not content to let Apple have all of the October announcement fun, Samsung and Google are partnering for Samsung Mobile Unpacked 2011: Google Episode.

This is the event where we expect to see an official announcement of the Samsung Nexus Prime and possibly the Droid Prime.

The event, scheduled for October 11th in San Diego California is low on details, but this lines up with previous Droid Prime announcement dates. 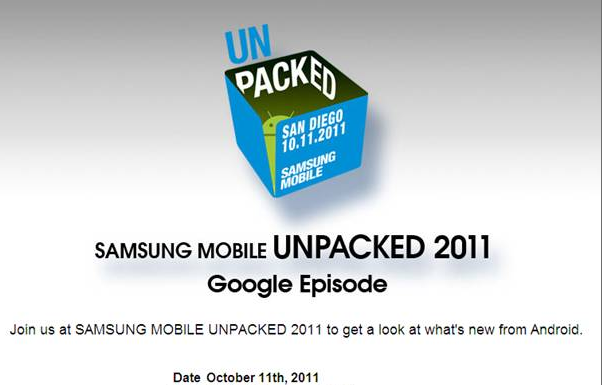 Samsung And Google Are Set to Announce the Nexus Prime

Because the invitation tells us that we will, “get a look at what’s new from Android.”, we expect to see not only the latest Nexus device, but also Android Ice Cream Sandwich. Ice Cream Sandwich marks the convergence of the mobile Android OS (Gingerbread) and the tablet version of Android (Honeycomb).

The Samsung Nexus Prime is rumored to have a dual core processor (possibly TI-OMAP), a rear 8MP webcam, 2MP front facing camera and a 4.5″ to 4.65″ display. Best of all, the Nexus Prime is said to run on Verizon’s 4G LTE network. The announcement timing would make sense given the space between the Droid Bionic, Verizon’s latest top end 4G LTE smartphone.

This device could be the Droid Prime when it arrives on Verizon, but it would be a change for a Nexus device to share branding such as the Droid name. We had heard that these were two separate phones, but also conflicting rumors.

Previously all of the Google Nexus devices have featured a “vanilla” version of Google Android. These devices also have new features and upgrades faster than other devices. It wouldn’t be out of the question to see NFC and Google Wallet on the Samsung Nexus Prime or the Droid Prime.

No word on the Droid Prime release date or pricing, but we hope to learn more in just a few short weeks. Let’s hope Google, Samsung and Verizon are paying attention to what the Droid Prime needs to beat the iPhone 5.

Is this enough to take your mind off the iPhone 5 announcement?