Though Apple had largely avoided the near field communications, or NFC, technology used for easy Bluetooth pairing, sharing files, and for digital wallets that rivals have been doing, the company may still be considering NFC for other purposes on iPhone and iPad tablets. Apple may be tying in NFC technology to its digital iTunes and App Store to allow users to gift digital content that’s already been purchased.

That means that if you had just bought Angry Birds for your iPhone and are bored of the game, and I happened to like that game, Apple would allow you to tap your phone to mine and just gift me your used game provided we both have iPhones with built-in NFC chips. 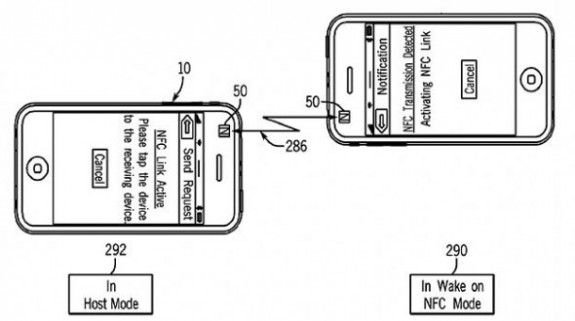 In addition to games, other apps could also be shared as hand-me-downs. Music, movies, books, magazines, TV shows, music videos, and other iTunes content may also be eligible as well.

This is different from the current gifting mechanisms that exist on iTunes today. Today, the only way you can gift an app, movie, song, book, or magazine is to gift a fresh copy of the app directly from iTunes or the App Store to the recipient. With NFC gifting, you’d at least have a chance to play the game, use the app, listen to the song, or watch the movie  before sending it off to someone else. It’s like giving your old college roommate your used CD collection.

News of Apple exploring the use of NFC for gifting pre-owned digital comes from a recently unearthed Apple patent that explores the technology for sharing digital content. While Apple isn’t go quite as far as creating a will to bequeath your entire iTunes purchase to a living survivor in the event of death, the move may help increase the popularity of digital content. Opponents of going fully digital, especially where purchases of movies and TV shows are concerned, have argued that these libraries cannot be freely shared with friends nor can a surviving relative or friend have access to a user’s digital library after they pass on.

Previously, we had reported that Apple and Amazon are looking at ways for users to be able to sell individual digital titles that they own on the second hand market similar to selling your dusty old book to a used book store.