The NFL comes a little closer to offering a great mobile viewing experience with the NFL Game Rewind app, but sadly fumbles the ball with silly restrictions and an overpriced subscription model that only appeals to super fans.

The app lets users watch football on their iPad or Android tablet. So far that’s awesome. Unfortunately, the sports fan can’t watch them live. That might not suck too bad but the viewer can’t watch them until all the games on Sunday end. If my team finishes around 4 PM I can’t view the game till probably midnight or later on the East coast thanks to this silly restriction.

Here’s what subscribers do get. The app offers an HD stream of the game after it’s over. Coaches Film comes with lots of cool viewing angles and an onscreen telestrator feature (see below). That’s that thing the announcers use to draw on the replays. Watch a condensed version of a game in 30 minutes with all the boring stuff edited out. Go directly to big plays, like touchdowns and turnovers. See all the league’s scores and stats. Get play-by-play analysis of the games. 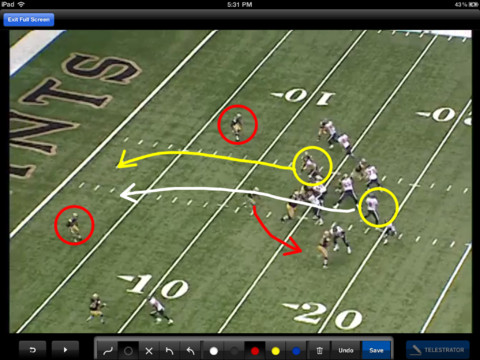 This app makes sense for really hard-core NFL fans who like to watch game film or for people who cover the NFL for a living. I can see players and coaches lining up for this app. For even an avid fan like me, the restrictions of this app combined with the cost of the subscription makes it a disappointment.

Even if I could get behind an app that lets me watch delayed showings of my Packers late Sunday night when the Sunday Night game ends, there’s a few more restrictions. The fan can’t watch the Monday night game until 24 hours later. Who wants to crawl inside a hole and ward off those terrible people who love to tell me the score of the game I just recorded while I was working. I don’t like watching a game when I know the outcome.

Another restriction keeps the user from watching any games during live games. So, I can’t watch Sunday’s game during Monday’s, Thursday’s or Saturday’s games, once they start. 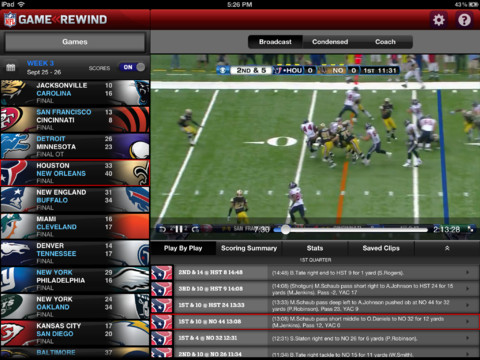 The app requires a $34.99 subscription for just one team’s games. For just this season, the fan pays $39.99 and access to the past three plus playoffs and the Super Bowl bumps the cost to $69.99.

The cost feels like I’m taking an illegal block in the back from the NFL and their TV partners. I can’t see paying that much for games that I already know the outcome of, which will almost certainly happen with the restrictions and delays. Take away the restrictions and the price is cheap. Make a $20 app for all the features and I’m buying.

One more kick in the pants hits when I realized that only Android tablet users can enjoy the app. My Samsung Galaxy S III or my son’s Galaxy Note aren’t on the list, but the Nexus 7 Tablet is. All iPad models can use it, but iPhone users can’t.

DirecTV offers an expensive alternative that lets me stream the games live. Subscribers of the Satellite service can get the NFL Sunday Ticket Max and use the mobile app to view games live. The Android app works on most devices including phones. It also comes on the iPad and iPhone. It’s expensive. Really expensive at $299.95 for Sunday Ticket Max which includes the mobile capability. Plus users must subscribe to DirecTV. Also, Verizon users can get NFL Mobile.