As the NFL gets back to normal after the long labor dispute, one team changed how they distribute the normally thick book of plays that contains the team’s strategy for how they plan to unseat last year’s champs – this time around my Green Bay Packers! That team, the Tampa Bay Buccaneers, issued an Apple iPad 2 with the entire playbook stored on it along with game film normally distributed on disk.

“It’s crazy how much technology has changed the game,” said the team’s safety, Cody Grimm. He explained how teams used to sit around a film projector in a dark room watching film of their past games and next opponent. “Stuff that we used to come here to see, we can sit on our couch at home and have access to it 24-7. It’s awesome!”

Grimm enjoys viewing film while “snacking out on the couch” and remarked how much faster he can get through a game’s film as a result.

The idea came from coach Raheem Morris. He took advantage of the iPad during the work stoppage this summer. He watched video of their draftees along with the team’s GM Mark Dominick and Dennis Hackey, who heads up player personnel.

Before the iPads the technology team for the Bucs would burn video onto DVDs for the players to take home to watch. Now, Dave Levy, who oversees the teams video department, and Chris Wells, their director of football technology, set it up so players can download the video to the tablet. Instead of a remote aimed at a set-top DVD player or a portable player, they just flick their fingers to fast forward and tap to play. 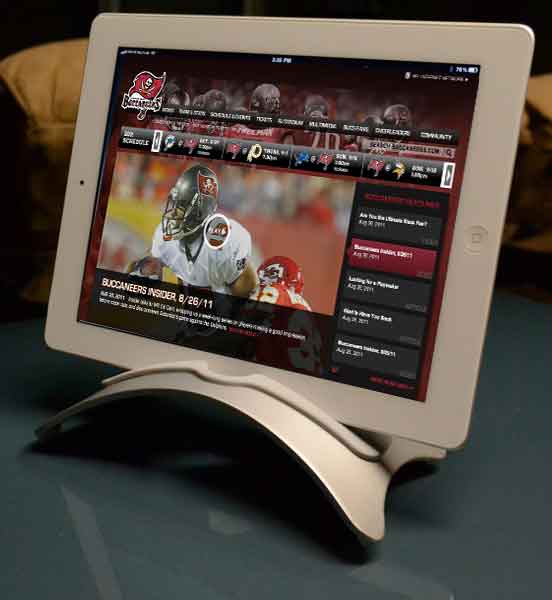 Some of the older guys haven’t acclimated to the new system well. Instead of taking notes on the iPad, 8th year running back Earnest Graham and Jeff Faine, in his 9th season, doesn’t use the built-in note taking features preferring pen and paper. But players do like not having to carry a phonebook-sized playbook around. Players are more likely to consult the iPad playbooks than the old beastly book because of its convenience. They also enjoy using the iPads for other things, like listening to music while studying plays. I’m sure they enjoy a little Madden or Angry Birds too!

When a player gets cut or traded, they still go through the ritual of some guy tapping them on the shoulder in the locker saying, “Coach wants to see you, and bring your playbook!” Now they just pick up their iPad and take the long depressing walk to the coach’s office.

Why Other Teams are Waiting

Tampa Bay jumped on this technology first, but it looks like the Dallas Cowboys considered the change earlier this year, according to Pete Walsh, the team’s technology director. Saving money tops his list of reasons for considering the change. The Cowboys print thousands of sheets of paper each year. This alone would mitigate the need for all that copying and would pay for the iPads.

He fears that digital versions of the playbook might end up getting out into public hands if they go this route. They may not be the only team that has this fear, according to reports. A player, knowing he is about to be cut, could copy the playbook and distribute it out of spite. Digital watermarks could help identify the culprit, but the damage would be done. It likely has other teams waiting to see if the Bucs iPad security can keep playbooks locked up tight..

No iPads on Sidelines

Other teams might be avoiding tablets due to sunlight. Most tablets are not as easy to view in direct light on a sunny Sunday afternoon. Even if teams follow the lead of Tampa Bay, don’t expect to see them along the sidelines during day games until manufacturers solve the problem.