As the first NHL game for the PS4 and Xbox One approaches we are taking a look at the NHL 14 vs NHL 15 differences that gamers will see in September.

EA Sports skipped a NHL 14 PS4 and Xbox One release last year, leaving fans who upgraded wanting for a next generation hockey game. Now the Xbox One and PS4 NHL 15 release is less than a month away and EA is sharing some of the updated features.

We’ll take a look at the NHL 14 vs NHL 15 features that hockey fans and gamers can expect. The NHL 15 release is on for September 9th. 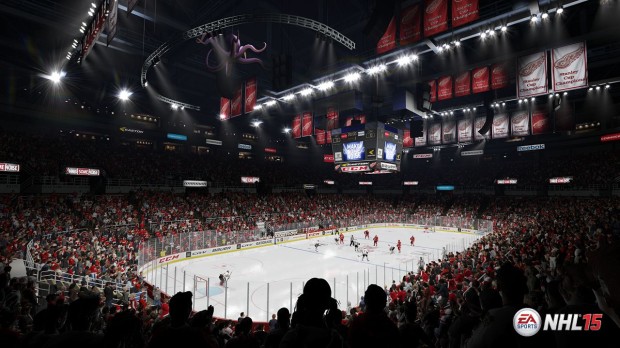 The NHL 14 vs NHL 15 comparison highlights many upgrades possible only on the Xbox One and PS4.

Right off the bat the biggest difference between NHL 14 vs NHL 15 is that the Xbox One and PS4 get a bigger and better experience. After skipping over the consoles last fall, NHL 15 delivers a lot of new features on PS4 and Xbox One. The Xbox 360 and PS3 NHL 15 release still includes updated NHL Collision physics, but NHL 15 is all about the new consoles.

Prepare to upgrade if you want the best looking NHL 15 experience this fall. Here’s our look at the NHL 14 vs NHL 15 key differences based on what we know so far about the new EA NHL release.

In NHL 14 EA introduced a new Collision Physics engine, adapted from FIFA, to deliver better physic that include speed, body size and more into the impact. This delivers better looking contact and more realistic outcomes when you deliver a hard hit. In NHL 14 EA was able to make it easier to make the right hit, for more realism and a better overall outcome. The video below showcases NHL 14 collision physics.

In the Xbox One and PS4 NHL 15 release EA Sports is able to up the ante with physics for every player on the ice. This requires the power of the new consoles, and it means you’ll see more realism and reactions will better match a real life scenario.

Expect to see this shine when you are involved in multi-player collisions and especially as you fight for a last-minute goal and things go from hectic to crazy. The NHL 15 video below shows how this will come to life.

It’s clear in this NHL 14 vs NHL 15 comparison that EA cooked up something magical for the new consoles. Another major update in NHL 15 is puck physics.

First in NHL 15 the puck can hop over a stick, squeeze through an opening and deflect unpredictably.

The arena, player gear and player faces are part of delivering a realistic gaming experience. If you look at NHL 14 vs NHL 15 you’ll find major changes for the new consoles.

EA leverages the same technology that UFC did to bring more realistic looking players to NHL 15. The NHL 14 vs NHL 15 player models highlight the major difference in player likeness and the equipment that they wear, including how it looks in the game.

EA boasts that the stick, skates, pants and jersey are captured to deliver more detail in NHL 15 and dynamic cloth, “bring the speed of the game to life.” 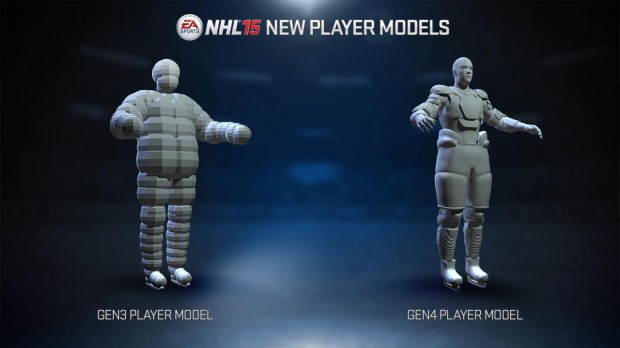 On top of the players, the arenas now show more detail than ever on the PS4 and Xbox One. The new consoles offer the power needed to show details of every NHL Arena in a much bigger way. The crowds are also more lifelike, with four times the animations and fans that are cheering you on. The crowd also reacts to the plays in ways that were not possible before.

As the video above highlights, in NHL 15 you can control the skating with your left stick and your hockey stick and puck with the right stick.

When you compare NHL 14 vs NHL 15, the player AI is one area where you’ll see vast improvements according to EA’s new feature rundown. It’s frustrating to watch your computer controlled team mates miss out on a major play that is developing or respond oddly to where the puck is and where it is going to be. 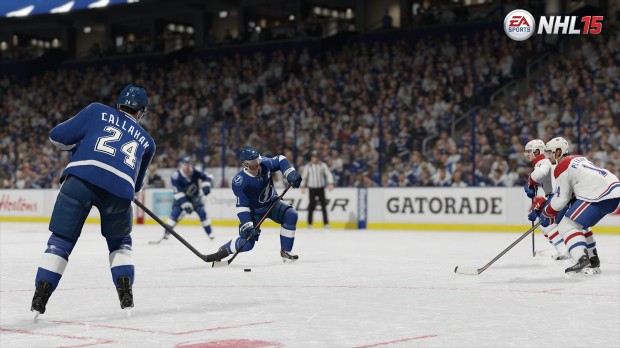 Players are smarter in NHL 15, and should open up passing and shooting lanes like never before.

In NHL 15 the new Vision AI promises to help keep the players on your team in position and anticipate plays before they happen. This means when you are in the offensive zone your team mates will make room and open up passing and shooting lanes instead of grouping close by.

You can also use the D-Pad to change your strategy on the fly. If EA delivers on this promise, expect smarter players and more fun in NHL 15.