During its CES 2012 press conference today, Intel took us on a tour of what might just be the future of the Ultrabook. That future is something the company calls ‘Nikiski’ and it’s a concept that replaces your normal trackpad, with a transparent touchpad, that can double as a gorgeous touchscreen when the Ultrabook is closed.

The company gave no indication as to when the technology would be made available to consumer’s but from the demo that we saw, we have our fingers crossed that Intel can deliver it sooner rather than later.

When your Ultrabook is open, Nikiski works like any old touchpad. Only it’s transparent. And it can sense your palms, so as not to disturb the cursor on the screen. That’s only part of what it’s all about though.

Once you close your Ultrabook, the Nikiski touchpad gets to work. Instead of a transparent touchpad, you have a full-on touchscreen where you can do things like check the news, your email, or your calender. You can also do things like accept a meeting. 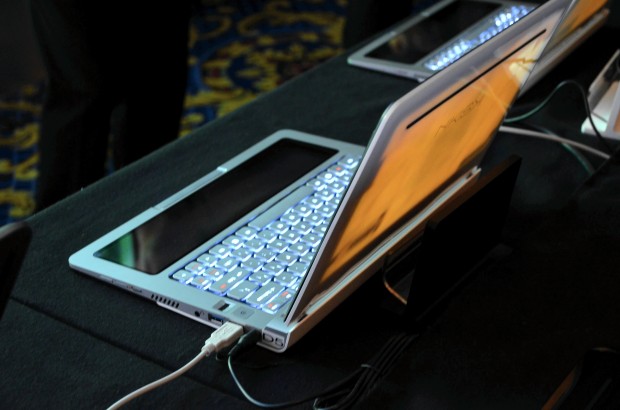 When closed, you can access your display using Windows 8 tiles and apps.

Again, all of this is done while the Ultrabook itself is closed.

Keep in mind, this is a concept that may never see the light of day but it looks fantastic and Intel is committed to taking the Ultrabook platform to new form factors so anything is possible.