Despite pressure from investors and lackluster Nintendo 3DS sales, Nintendo’s Chief, Satoru Iwata, has gone on record again, saying that the iPhone, iPad and iPod Touch won’t be playing Mario and other Nintendo games while he has anything to do with it.

Iwata recently responded to the continual question by saying, “That is absolutely not under consideration.”

Iwata’s refusal to bring Mario and his friends to the popular smartphone isn’t without reason. Nintendo has always been a hardware company, that also makes games. If you can play Nintendo games on the iPhone, it would be like Apple allowing you to run OSX on any piece of hardware. 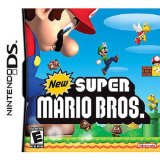 Coming to the iPhone?

Iwata says he is focusing on the long term future of the company, rather than short term profits which would come from iPhone and iOS sales of games on the iPhone and iPad.

Based on sales figures, you might also argue that this is shortsighted. The Nintendo 3DS may sell 2.5 million units by March 31, 2102. The iPhone on the other hand might be able to sell that many units in the next 11 days, if last quarter’s iPhone sales continue.

Rather than release new games for the iPhone an iPad, I think Nintendo could make serious amounts of money by selling the classics, even at a non-Nintendo device Premium.

I know my Nintendo DS spent plenty of time playing the old games like SUper Mario Bros 3. and Super Mario World. If these games came to the iPad, even at $10-$15 a pop I’d pick up a few of them — but I don’t see myself buying a portable Nintendo gaming system anytime soon.