Miiverse, the social network Nintendo introduced on the Wii U is now available on the web for smartphones and desktops, though it has a few limitations.

The Miiverse is Nintendo’s way of letting gamers communicate with each other in and out of games. The network creates hubs for each individual game that supports it, where gamers can converse. Users can post hints or comments about games to the service, and they will show up in games for other users.

The Miiverse on smartphones is a mobile website, and not a smartphone app. This means it works on the iPhone, Android, BlackBerry and Windows Phone. 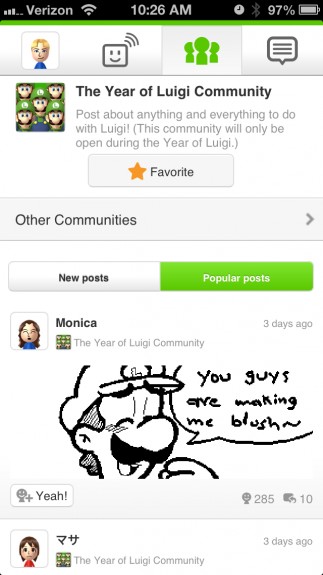 On smartphones users can view posts in Miiverse on a website that looks fairly similar to Twitter’s mobile site. Users can either choose to view a feed of what their friends or people they follow are saying about games, or they can dive into communities to see what everyone is saying about specific games or franchises.

Web users can’t post items directly to the Miiverse, but the do have the option to comment on posts or react to them. It means users can participate in conversations, but can’t start their own.

The limitations are likely in place because many of the posts on the Miiverse are screenshots of games or pictures that users drew on the Wii U GamePad. Perhaps in the future Nintendo will let users post to the Miiverse from their iPhones or Android devices, but for now it’s just a way to view content.

While the Miiverse is the first service of its kind on a video game console, it isn’t exactly the busiest social network out there. It seems there are a few diehard users on the service, but poor sales of the Wii U really hurt the network’s potential reach

That may change when Nintendo releases games like Pikmin 3 and The Legend of Zelda: Wind Waker HD. The eventual release of the Miiverse on the 3DS may help increase use as well.

With the Next Xbox and the PlayStation 4 on the horizon, Nintendo may have a hard time competing, however.