Nissan has just announced their own smartwatch, and it’s called the Nismo (the name of Nissan’s performance division). The company says that the Nismo smartwatch is still in its conceptual stages, but it’ll be talking more about it throughout the week during the Frankfurt Auto Show in Germany.

The watch will monitor the efficiency of a vehicle as far as gas consumption is concerned and provide real-time miles-per-gallon readings. It’ll also be able to provide performance data and even show biometric data such as heartrate, making sure that you won’t get too stressed out when you put the pedal to the floor, but we’re guessing most auto enthusiasts wouldn’t even sweat it.

This is the first time that we know of that an auto maker has unveiled a smartwatch. Nissan says that wearable technology is becoming “the next big thing,” and it’s wanting to take advantage of the popularity of smartwatches by delivering one of their own to the market, but putting a unique twist on it by offering it as a driving companion for car nuts. 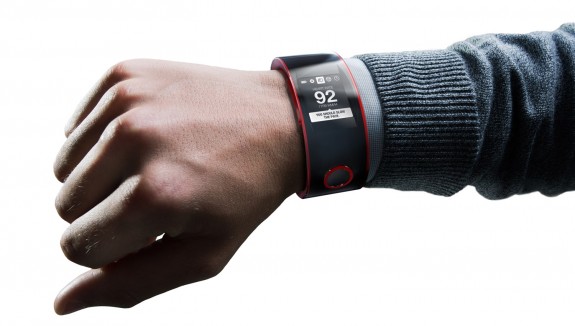 Overall, the watch has a variety of features that have been adapted from technology used to monitor the performance of drivers who compete in the the FIA GT and Blancpain Endurance Series for Nissan Nismo, so you’ll have the opportunity to experience what it’s like to be a race car driver somewhat, even if it’s only to see how drivers are monitored during races. Furthermore, you’ll be able to share your stats on a variety of social networks, including Facebook, Twitter and Instagram.

Nissan says that the watch’s battery will last for more than seven days with “normal usage conditions,” which is leaps and bounds ahead of Samsung’s Galaxy Gear smartwatch, which can only pull off a full day’s worth of battery life. Of course, the Nismo probably doesn’t have as many bells and whistles as the Gear, but seven days still seems pretty impressive.

Obviously, since the watch is still a concept, no price or availability details have been revealed, but Nissan says that it’ll available in black, white or a black and red combo, and it pairs to Nissan vehicles using Bluetooth. However, there’s no word on whether or not the watch will work with other Bluetooth-enabled vehicles from different auto manufacturers.