No widgets for you! Apple apologist's app gets banned 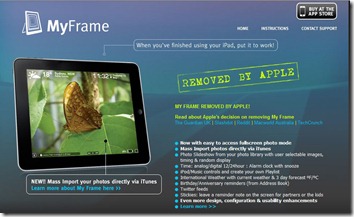 It seems that Australian iPhone and iPad app developer Shift Jelly now understands why so many in the tech world have serious reservations about Apple’s App Store.

I don’t think there’s that much that is ‘murky’ about their approval process, every time our apps have been rejected it has been for a reason that is documented in either an interface guidelines document, or some other part of their documentation.

Just yesterday the company that I work for (Groundhog Software) got a phone call from Apple, telling us that our photo frame application for the iPad My Frame was to be removed from the Apple App Store. They refused to be pinned down to an exact reason, simply stating that they were doing a cull of any applications that presented widgets to the user.

To their credit, Shift Jelly left the original post up for us all to gawk at with a few added notes:

The above post represents how I felt over a month ago, I obviously agree with you now that, yes, the app store approval process is murky. At the time I didn’t.

The My Frame Application has now been removed from the App Store according to Shift Jelly. I wonder how long it will be before this developer gets hit with some sort of legal bill for even commenting on the matter.

Personally, I think that the App Store is an awesome concept. It has significantly lowered the barrier to entry for many small developers. By taking care of the marketing for software developers Apple has allowed them to reach a market that they never could have in the past.

But sometimes it seems like the Apple’s version of an App Store might be more of a lure than a blessing for developers since Apple also doesn’t seem to take any care about the damage that it does to those same developers when it sweeps through culling perfectly legitimate apps with today’s new rule.

Apple offer no recourse or compensation for a developer who finds that the many months they spent slaving over their app was all in vain. They don’t provide any suggestions on how to alter the app to suit their guidelines. For that matter, the guidelines appear to be made up on the spot. And of course there is no alternative market place or App Store for iPhone and iPads (at least of the non-jail broken variety).

According to today’s post from Shift Jelly, Steve Jobs replied to an email on the matter of My Frame:

We are not allowing apps that create their own desktops.  Sorry.

Sent from my iPad

It reminds me of the Soup Nazi episode of Seinfeld, “No soup for you! Next!”

Before you buy your Mom an iPad (cause that’s who they are intended for right?) think about the developers like Shift Jelly that were exploited to make it possible. Steve Job’s suggestion in response to our complaints about app store policy is of course is ‘if you don’t like it go buy a different phone!’ Thank you Steve, and now that there are several good alternatives coming to market I will certainly do that!

I will be seriously looking at replacing my iPhone with an Android 2.2 phone that will allow for apps to be delivered over the web, completely outside of the anyone’s monopoly app store.