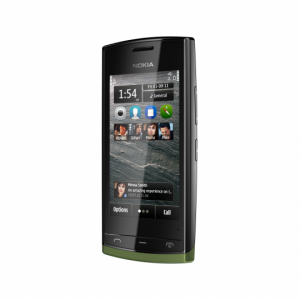 Given Nokia’s new model naming convention of a three-digit model number where the higher the first digit, the more powerful the phone, the newly announced Nokia 500 should be a ‘mid-range’ handset. Despite its average stature in the new branding strategy, the Nokia 500 is a beast of a phone and is the most powerful Symbian smartphone to date with a single-core 1 GHz processor and Symbian^3 Anna pre-loaded on the device. The phone will be available beginning the third quarter.

The device will be among the most affordable smartphones to date, priced at the equivalent of 215 USD, the Nokia 500 is a 3G smartphone with penta-band HSPA connectivity–like the Nokia N8 and E7 before it–so that it will work on most 3G networks around the world including AT&T and T-Mobile USA. This is a rarity as phones from other manufacturers are usually designed to be compatible with either AT&T and global networks, or T-Mobile and global networks, but not for both U.S. 3G GSM networks.

Other features include a 3.2-inch 640 X 360 resolution display, which is typical for most Symbian devices, WiFi, GPS, and a 5-megapixel camera. Available this quarter with a black front bezel surrounding the screen, the Nokia 500 will also be available with a white bezel as well in the fourth quarter. Numerous color back plates are also available making this a very customizable smartphone.

Based on price and features, the Nokia 500 is an excellent value at a mere €150. Given the conservative processor use of Symbian devices, 1 GHz of speed will offer ample performance on this smartphone.