In as much as I want these leaked and rumored specs for the Nokia 900 Windows Phone 7 device, forthcoming from the Finnish former Symbian phone-maker, to be true, the specs appear nothing more than wishful thinking created by a crazed fan. However, if true, the Nokia 900 will be among the best phones on the market with leading technologies for processor, graphics, display, and more, coupled with Nokia’ strong industrial design, build quality, and camera prowess.

The 4-inch 720p display would utilize Nokia’s Clear Black Display technology based on AMOLED screens. The device would have a resolution of 1,280 X 720 pixels and could capture images with a 12-megapixel camera sensor, similar to that on the Nokia N8, and record videos in 1080p at 30 frames per second. 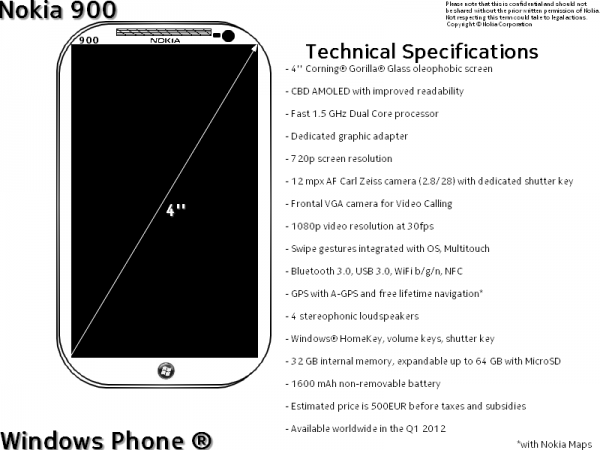 Here are the specs:

Also, it seems that the 32 GB of on-board memory on this phone, with the ability to add another 32 GB via a micro SDHC card would give this device a whopping 64 GB of memory. Unfortunately, as My Nokia Blog mentions, some of the Nokia 900’s specs were previously rumored for the MeeGo-powered N9 or N950 phone, though many of these high-end hardware features never made it to the MeeGo devices leaving us a little bit cautious and wary if they’ll end up on a Windows Phone device. If true, the device is expected to retail for around 500 Euro in Q1 2012.
Related Topics:leaksNokiaNokia 900rumorsspecsspeculationsWindows PhoneWindows Phone 7