According to Windows Phone Central, a new update to the settings application for Nokia Lumia users adds the ability call and message blocking lists. With the features Windows Phone users can finally block the numbers responsible for sending them unwanted media messages and sales calls.

Unfortunately, the application update requires that the Lumia Windows Phone in question already have the Windows Phone 8 GDR2 update installed on their device. That update has started rolling out to international users on certain devices already, but the overwhelming majority of American users still don’t have that update. 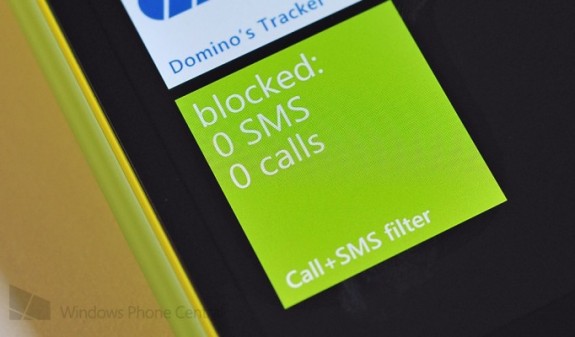 A screenshot of the new calling and SMS blocking features from Windows Phone Central.

As the Nokia Lumia 1020, Lumia 520 and Lumia 925 all come with the Windows Phone 8 GDR2 update preinstalled, those users can expect the new call blocking and SMS filtering options update to roll out to them over the next few days or so.

Users can enable the feature by heading to their Settings menu and tapping on Call + SMS filter once they’ve gotten the updated the Extras + Info application from the Windows Phone Store.

The list of reasons why Windows Phone users should only consider purchasing Windows Phones made by Nokia just keeps getting larger and larger. Although Microsoft, reportedly, added the ability to enable SMS and call blocking to Windows Phone 8 with the GDR2 update, it has left it to individual Windows Phone manufacturers to implement in their devices, meaning it’s possible that Samsung and HTC users won’t see this kind of functionality for some time.

The call and SMS filtering features are just another potential boon for Nokia users, and potential headache for Windows Phone users who don’t have a Nokia device. Just as the app exclusivity agreements Nokia has signed with developers illustrates, Windows Phone is rapidly turning into an ecosystem divided into the haves and have-nots.

Those users who have Nokia Windows Phone have the most features, while Microsoft fails to incorporate those features into the operating system itself, leading to a situation where basic necessities, like call blocking, are specific to different manufacturers. This sort of problem was exactly what Microsoft said it hoped to avoid with Windows Phone.