Late Thursday ahead of the Friday official availability of the PureView flagship Lumia 1020 smartphone, Nokia had already issued a software update for its Pro Camera app, which allows finer creative controls in the photography process. The much lauded Pro Camera app brings DSLR-style controls to the 41-megapixel point-and-shoot smartphone camera, and it does a good job at giving users more flexibility with various exposure settings, including ISO, shutter speed, exposure compensation, white balance, and even manual focus. The only thing missing from the app is adjustments for variable apertures.

The update is now available through the Windows Phone Store that’s preloaded on the device, and new users who are picking up their phones today could update the app. It’s unclear what changes Nokia has made to the app as I couldn’t find a change log detailing any improvements.

One of the things that I had noticed when I got my review unit earlier this week is that the camera app froze on me several times during my twenty-four hours of testing. So far, with the update installed, it seems that the freezing issue has been rectified. Another issue is that when toggling through to enable/disable the flash and/or autofocus light, sometimes the textual description just fell off the screen and was not readable. This too had been remedied. As these problems have seemingly been rectified on my review unit, I would advise new owners to download the app.

Other than these minor bug fixes, I am not trained enough to perceive any noticeable changes to the algorithms to any changes on how the Lumia 1020 renders images. We’ll have to wait and hear from Nokia what changes have been made. 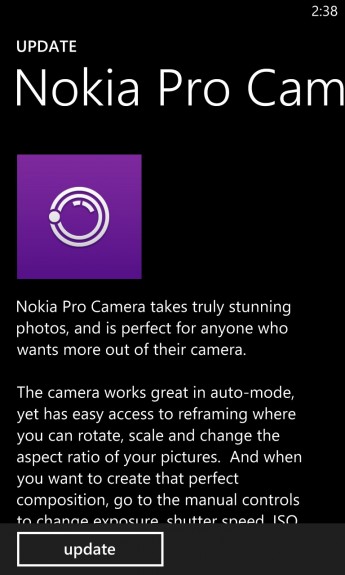 The Lumia 1020 is an unrivaled camera phone whose only challenger on the market so far is the Samsung Galaxy S4 Zoom, which hasn’t arrived yet in the U.S. market. The Galaxy S4 Zoom offers 10X optical zoom with a point-and-shoot sensor and a 16-megapixel imaging resolution. The Nokia Lumia 1020 uses digital zoom, but the larger sensor coupled with 41-megapixels of resolving power means that you can have lossless zoom for up to 3X. The benefit is the Lumia 1020 is more compact and easier to handle whereas the Galaxy S4 Zoom looks and feels more like a point-and-shoot and may not be as ergonomic when used as a phone.

The Pro Cam app is expected to also trickle down to other Lumia devices once those phones receive the proper software update to be able to use the app.

Update: It appears that Nokia had included bracketing functionality to the Pro Camera app. This would allow the camera to capture a number of pictures that are properly exposed, under-exposed, and over-exposed so users can create their own HDR images by stitching them together in post-processing through a photo editing program. The update, however, doesn’t enable native HDR mode.