Ahead of new GDR2 software update for Microsoft’s Windows Phone platform, it looks like Nokia has already begun working on a new, unannounced Lumia smartphone with a quad-core Snapdragon 800 processor from Qualcomm. The Snapdragon 800 chipset is considered to be one of the most advanced mobile processors on the market when it was announced earlier this year at the Consumer Electronics Show, and devices with this new CPU should begin launching in the second half of this year.

This would place this Nokia Windows Phone 8 Lumia device on a level playing field with the very best Android flagships. Currently, Windows Phone lags behind Android, at least on paper, in the specs department. And though Windows Phone only currently supports dual-core CPUs, performance on Windows Phone is still smooth in real-world performance.

References to Qualcomm’s most advanced mobile CPU was found on some Nokia developer page. According to Techtastic, “Nokia is only listing hardware that they are actually using,” meaning that this hardware configuration already exists, at least in some prototype form.

Alongside the new processor, the Lumia smartphone would also get a graphic jump to a new Adreno 330 integrated graphics solution. Most recently, we’ve seen leaked benchmarks for a device from Nokia quad-core Snapdragon processor and Adreno 305 graphics. That graphics would mean that that particular device is using a more modest Snapdragon 400 CPU. The Snapdragon 800 being referenced in the developer pages here suggest a much higher end offering. 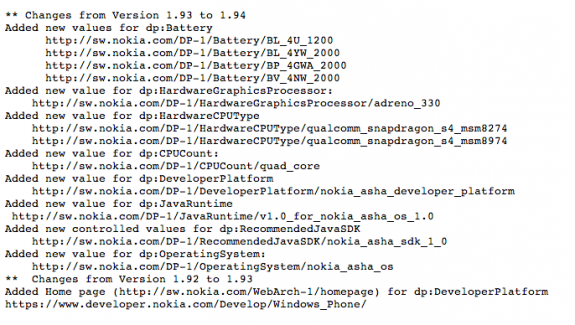 In the past, it was rumored that the Lumia EOS 41-megapixel PureView camera would launch with the new Snapdragon 800 processor, though that may be unlikely. A similar 41-megapixel camera Nokia 808 PureView on Symbian offered decent performance on a single-core processor, so the camera sensor doesn’t need that much horsepower to render a high resolution image.

The developer logs did not mention support for a 1080p HD display, which may come later with a GDR3 update.