Nokia showed off some of the apps on stage at the Windows Phone 8 announcement, but also detailed the apps on its Nokia Conversations blog.

The first big app from Nokia is Camera Extras which combines features from a number of other camera apps, including the camera app in RIM’s upcoming BlackBerry 10. From RIM, Nokia borrows the idea of going back in time to find the perfect faces for each photo. The app actually takes multiple photos, then lets the user fix the details of the one it selects. It’s great for taking photos of friends who can never sit still.

Other Camera Extras features include a self-timer so the photographer can get in the shot, a panorama mode, and action shot mode which uses a faster shooting speed.

Another Nokia app is Contact Share. The app’s purpose is to make sharing contacts over SMS or email faster. Users will no longer have to copy/paste or type out contact info, they simply need to use the app to send it to friends. Not as exciting as Camera Extras, but still useful. 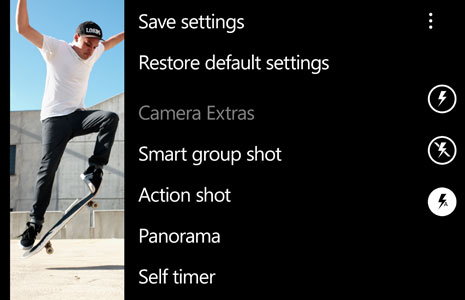 Finally, Nokia Lumia owners will receive Zynga games Words With Friends and Draw Something before other Windows Phone users. We don’t know how long the wait will be for other users, however.

Most of these apps should hit the Marketplace in the U.S. either later this month or in July. They will come alongside a software update for the Lumia 710 and Lumia 800 which will finally bring Internet sharing to both devices.