A screenshot taken from what is allegedly the Nokia Lumia Bandit, a smartphone that’s rumored to feature a 6-inch display, seems to confirm at least one of the features slated for Windows Phone 8 GDR3.

Twitter leaker @EvLeaks shared the screenshot over this morning. In it, a device’s Windows Phone 8 Start Screen can be seen with three square sections that are filled with Live Tiles. Rumors indicated that to support 1080p displays Microsoft would add an extra row of Live Tiles and cut down on the Start Screen’s border. Those reports also indicated that Windows Phone 8 GDR3 would bring 1080p display support to Windows Phone. This image seems to back up both of those claims. 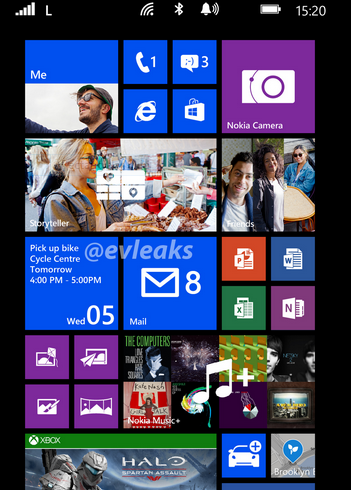 A screenshot taken from the Nokia Lumia Bandit, posted by Evleaks.

Read: Next Windows Phone 8 Update in Testing, Will Enable a Nokia Phablet

As for the Nokia Bandit phablet itself, according to EvLeaks the device will be known officially as the Nokia Lumia 1520. While not much else is known about the device, all reports have pointed to the device having a 1080p display, a rumor backed up by today’s leaked screenshot’s dimensions.

Many outlets expect Nokia to announce the Lumia 1520 along a new tablet device at in event on September 26th.