Nokia has officially announced that all of the products made by the Finnish phone-maker will come with near field communications, or NFC, support in the future, including the company’s Symbian and Windows Phone 7 handsets. NFC, which is gaining in mind share in the U.S. due to the potential of the technology to replace credit cards and wallets when coupled with a cellular telephone in the near future, but has also other uses and implications in a smartphone ecosystem, and Nokia is looking to tap those potential.

We’ve seen NFC support in leaked videos for the Symbian^3 Anna software update, where NFC-equipped Nokia phones can automatically pair with NFC-enabled accessories like headphones. Rather than utilize more complicated pass-codes for pairing that Bluetooth requires, NFC will enable consumers to more easily pair with phones. 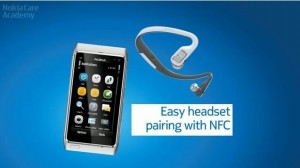 The company is aggressively pursuing the market after having announced plans to support NFC in phones. Nokia vice president Ilari Nurmi says, “From now on, all of our products will have an NFC chip inside. All other NFC-equipped devices can also link to our products.”

As NFC is beginning to appear in some of the company’s newest and most recently announced Symbian handsets, including the Nokia 600, the Nokia 700, and the Nokia 701, these handsets should be forward-compatible with future Nokia accessories that will sport the near field communications chipset for ease of pairing. Additionally, Nokia’s forward-looking statement would mean that NFC will also be coming to the yet-to-be-released Windows Phone handsets later this year.