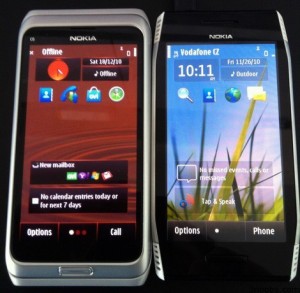 Silver Nokia E7 Next to the black X7

While the Nokia X7 multimedia-centric Symbian-based handset was rumored to come to U.S. carrier AT&T, the Finnish handset-maker had voluntarily cancelled the launch according to the Wall Street Journal. The handset would have have been announced with AT&T prior to the commencement of Mobile World Congress, but Nokia had decided to cancel the phone’s launch as it wasn’t going to ” receive enough marketing and subsidies support from AT&T.”

The move may be yet another setback for Nokia as the world’s largest phone-maker tries to tackle the U.S. market, which is dominated by Android, iOS, and RIM’s BlackBerry systems.

With the latest stumbles, Nokia may have to place more weight behind its next-generation MeeGo operating system, which is Linux-based and co-developed with Intel. The MeeGo project was a collaboration of Nokia’s Maemo OS and Intel’s Moblin OS. Symbian is seen by many as being outdated, clunky, and not offering the fluidity that newer operating systems bring, such as those powered by Apple’s iOS and Google’s Android.

In the U.S., Nokia has had few phones offered on a carrier, and the X7 would have been an AT&T exclusive. The move to cancel the phone may be a double blow to Nokia as AT&T is looking for other devices for its network as the carrier has recently lost exclusivity of the iPhone, which will also be offered by U.S. rival Verizon Wireless.

The X7 may still be offered globally and in the U.S. as an unlocked option. While this gives travelers and frequent switchers of carriers the option to freely insert any SIM card they choose into the handset, the average consumer may find that the handset is less price-competitive than carrier-subsidized offerings on a two-year agreement. To add value to its handsets, Nokia has also been bundling free navigation via Ovi Maps, which unlike Google Maps with Navigation on Android allows users to store mapping content and data locally so a constant network connection isn’t needed.

Other popular and recent phones from Nokia include the Nokia N8, which offers a great 12-megapixel camera with mechanical shutter, Xenon flash, and Carl Zeiss optics. The company will also start to ship, sooner than later hopefully, the business-class E7, which offers a roommy landscape-oriented hardware sliding keyboard.