Nokia has been heavily promoting its smartphones, both AMOLED and LCD sporting phones, with its patented Clear Black Display, or CBD, technology. So what exactly is Clear Black Display and why is it good for consumers? On a superficial explanation, CBD allows screens to be brighter, crisper, and more readable under direct sunlight without looking washed out.

One solution to preventing washed out screens is to increase the brightness. We’ve seen brighter displays, like the LG Nova Displays, but the drawback here is that brighter displays consumer more power.

Another solution is to reduce the reflectiveness and glare of screens, which work to a modest degree. However, under bright direct sunlight, these antireflective coatings don’t go far enough, according to Nokia, and that’s why the company has developed CBD screens.

CBD screens utilizes polarizing filters to help eliminate reflections, similar to how polarized sunglasses work. On a phone, however, the technology becomes a bit more complex as there are more layers for light to travel in and out of.

Here’s Nokia’s full explanation behind CBD screens, which is used on the new Lumia 710, Lumia 800, and Lumia 900 Windows Phone smartphones. The technology has also been implemented on some older Symbian models as well. 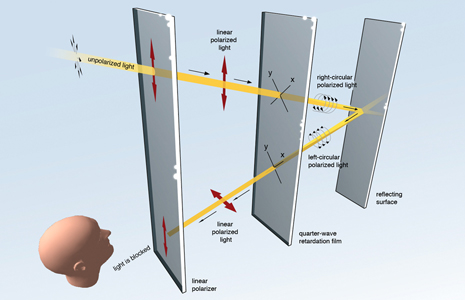 There’s both a linear polariser and retardation layers between the surface of your phone and the display. When light hits your screen, this is what happens:

So why doesn’t the light from your phone’s display get blocked? Because it only goes through the second half of this journey so the light is unpolarised when it hits the final filter and goes through.