Nokia has updated its free voice-guided turn-by-turn navigation app made specifically for the company’s Lumia line of Windows Phone. Now in version 2, Nokia Drive brings a number of new features to the Windows Phone platform, with the most noticeable feature being offline navigation. With offline navigation, users don’t need a constant connection to the Internet–like Google Maps with Navigation for Android–and users can pre-download maps and points of interest data in advance of their trip. This way, users don’t need to use their data plan and can download the maps when convenient to a WiFi hotspot, which will become increasingly useful as carriers are moving towards throttled data plans for overages as well as tiered data plans.

The downside of offline maps, especially on Windows Phone, is that it consumes a lot of space on the device, depending on how much map data you download. With the Nokia Lumia 800–and most Windows Phone–not supporting user removable storage card slots, users cannot augment the amount of storage that came preloaded on the device at the point of purchase. 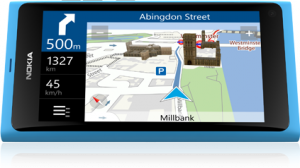 Other changes to the app include the addition of speed limit support as well as a more advanced dashboard.

Users of Nokia Lumia smartphones–which include the Lumia 710 and 800 currently available on the market today–can head on to Marketplace for Windows Phone to download the app update.

While these features are new to the Windows Phone version of the Nokia Drive app, the Symbian version for Nokia phones had long supported offline maps. Nokia Drive was previously known as Ovi Maps on Symbian phone.

Additionally, the Nokia Maps app on Windows Phone, which is similar in scope to Bing Maps on the device, has also received a recent update that allows users to pin favorite POIs and destinations to their home screens as a Live Tile for quick access and reference.

For Windows Phone users who are not part of the Nokia Lumia family and want a similar app to Nokia Drive, third-party Navigon provides for voice-guided turn-by-turn directions but at a cost.