Microsoft wasn’t the only one launching RT 8.1 based Tablets last night. Well, at least not yet the only one. Nokia held it’s party, Nokia World, in Abu Dabi and in addition to announcing new phones, unveiled the Lumia 2520 Tablet, a Windows RT 8.1 based Tablet. This gives the world two RT 8.1 based Tablets heading into the holiday season as the only availability date given for the Lumia 2520 is “just in time for the holidays” or “this quarter.” It’s been no secret that Nokia was working on its own Tablet with the code name Sirius. But now the guessing will begin as to how this new Tablet entry will rest alongside Microsoft’s just released Surface 2 RT Tablet. This will make for some interesting positioning once the Microsoft/Nokia sale is completed. AT&T has also announced that it will be a carrier for the LTE based Lumia 2520 in the US and Verizon is supposedly heading there as well. Intriguingly there will be no WiFi only version of the 2520. 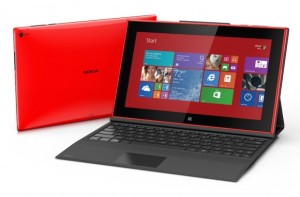 Lumia phone fans will recognize the look of the Tablet as Nokia is positioning the Lumia 2520 as a companion to that line of smartphones and the familiar bold colors (red, cyan, white, black) will be available. (What, no yellow?) The 10.1 inch Tablet features a 1920 x 1080 display that Nokia says will be the best outdoor viewable Tablet screen on the market, sporting a peak brightness of 650 nits with reflectance of less than 6%.

The Lumia 2520 will be running on a Qualcomm 2.2GHz Snapdragon 800 chipset with LTE built in. The rear camera will deliver 6.7 megapixels through a 1.9 aperture, and the front camera will be 2 megapixels. Carl Zeiss optics are featured as is the case with most of Nokia’s devices.

The Lumia 2520 will have an optional keyboad/cover that wraps around the device called the Nokia Power Keyboard that will provide an additional 5 hours of battery life for an additional cost of $149. The Lumia 2520 is reported to offer 11 hours of battery life on its own. Microsoft is set to release a power keyboard for its Surface devices later this year. The Lumia 2520 has two full-sized USB 3.0 ports and the Power Keyboard will add two more USB 2.0 ports if you need extra connectivity.

The 2520 will come with 32GB of storage that is not expandable on board, but users will get 7GB of Skydrive storage. Microsoft Office will be included.

Nokia will also include Apps that extend the experience including Nokia Storyteller, which will compile your pictures from a variety of sources into a single timeline. Using NFC and the Lumia Share App, phone users will be able to interact with Storyteller’s timeline. Nokia’s HERE Maps are included, along with Nokia Music and Nokia Video Director. Aiming for the family market, Nokia, along with Dreamworks will also include a game it calls “Dragon’s Adventure” experience. Combining HERE Maps and the LiveSight integration to play along with a “How to Train Your Dragon” adventure. Parents can use their Nokia phones to act as a “Quest Master” to change or guide the experience for their kids. Data from the Weather Channel and GPS will be used to match real world conditions.

Speaking of price the Lumia 2520 will begin at $499 before any possible subsides.