A leaked roadmap for U.S. carrier T-Mobile shows the Nokia Flame smartphone referenced again. The Nokia Flame is described to be a 4G handset on the leaked documents, but considering other devices on that roadmap with LTE shows that designation referenced, likely the Nokia Flame will not be a 4G LTE device and will only be able to max out on HSPA+ speeds.

References for the Nokia Flame was found on a leaked document published by Tmo News. At this time, little is revealed about the device on this document except that it is scheduled for a launch on April 24. 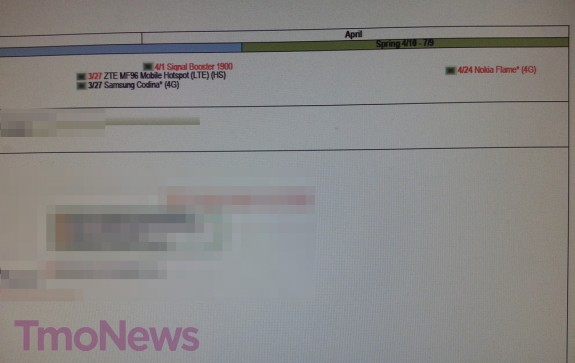 Right now, there’s still a lot of uncertainty about the Flame considering the timing of the leaked roadmap is just ahead of Mobile World Congress, a trade event that’s scheduled for the end of this month where Nokia is scheduled to have a press conference. However, if it’s the same model that was leaked last year, the Flame may round out the low end of the Lumia offerings in the U.S.

Given the hardware specs that were leaked last year referenced a dual-core 1 GHz CPU, the Flame will at least be running Windows Phone 8 as Windows Phone 7 only supported single-core processors. The device was also leaked with 512 MB RAM, a 5-megapixel camera, and 4 GB internal storage along with a micro SD card slot. That model was described to have a 4-inch display.

As T-Mobile already currently offers a model with slightly better specs and a relatively inexpensive price tag in the form of the Lumia 810 on its network, the Flame is speculated to perhaps be headed to the company’s prepaid Monthly4G lineup. This would be good news for Microsoft as it would help broaden accessibility for Windows Phone.

In related news, it was discovered that the Lumia 710 that launched on T-Mobile’s network last year will not be receiving an upgrade officially to Windows Phone 7.8.