Mere hours after it formally announced earnings for its Devices and Services as “discontinued operations,” Nokia is now sending out invites for a press event at this year’s Mobile World Congress trade show in Barcelona, Spain. So far, rumors are light but all of them point to Nokia using this event to formally launch the Nokia Normandy, its low-end Android feature phone.

Invitations for the event began arriving at some media outlets shortly after Nokia finished up its earnings report, according to The Verge. Instead of heavily hinting at what it plans to use the event for, which takes place on Monday February 24th, Nokia is only inviting users to meet it “under the tree.” 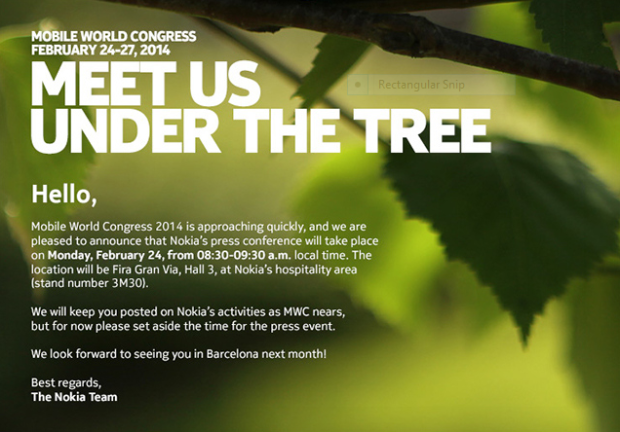 Naturally, speculation about the event has focused on that phrase and the picture of tree branches in the background of the invitation. That speculation has centered on the Nokia Normandy, the often leaked low-end Android phone that Nokia plans to introduce into its Asha line of feature phones. The Normandy is rumored to run a Nokia-modified version of Android or what those who build software call a branch or fork, hence the suspicion that Nokia is planning on launching the Normandy at the event.

On the other hand, “under the tree” seems like a hint that Nokia is joining or taking shelter under something bigger than itself. This may be a bit over the top, but it’s not impossible that Nokia is simply hinting at an event to announce that Nokia Devices and Services is under the control of a new corporate parent: Microsoft. Nokia announced that it’d entered into a definitive agreement to sell its Devices and Services business to Microsoft back in September.

After some initial negative reactions from investors the buyout has gotten the approval of most governmental bodies. Now, the only hold out is China.

Nokia’s earnings report listed its Devices and Services division as “discontinued operations,” also hinting that the buyout deal is close to being finalized. Microsoft has only announced that it will merge Nokia Devices and Services with its newly formed hardware engineering division.