According to the latest report, Nokia is in advanced stages of discussion with a venture capital firm to sell off its Vertu line of luxury smartphones. The Nokia-owned Vertu smartphones are hand crafted using luxury materials like sapphire crystal for its glass screens, jeweled bearings, ceramics, leather, and precious metals using age-old techniques employed by luxury watchmakers. In the past, the company has relied on Nokia’s feature phone S40 operating system, but recent Vertu handsets have adopted Nokia’s Symbian OS. Given that Nokia is shifting its attention from Symbian to release Windows Phone handsets, Vertu’s situation inside Nokia’s product family remains precarious at best. 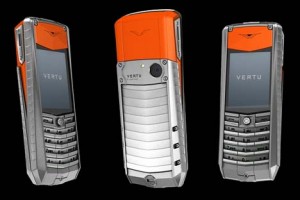 The Financial Times is reporting that Nokia has retained Goldman Sachs to advise it on the sale of the Vertu brand, and at least one venture capital firm is interested in buying Vertu. That firm is Permira. The deal is estimated to be worth at €200m, which will likely help Nokia’s financial numbers given that Vertu’s parent has lost $1.7 billion in its most recent quarterly earnings report. Following its report of loss, Nokia’s credit ratings were quickly downgraded. This move would help Nokia regain its focus.

The sale of Vertu represents another step that Nokia is taking to sell off its non-core businesses as it invests more heavily in the Windows Phone ecosystem.

At this time, its unclear if any buyer of Vertu would keep the luxury phone on the aging Symbian OS platform or if the future of Vertu will see these luxury handsets adopt more modern operating systems like Android or even Windows Phone, like Nokia.

Unlike other luxury handsets, such as the Porsche BlackBerry or various Prada phones by LG and Samsung’s Armani-branded handsets, the Vertu handsets are exquisitely crafted to reflect the highest grade of materials and craftsmanship–they are unique in their own right and are not just re-branded handsets.

Another feature of Vertu phones is a dedicated concierge button that allows its wealthy clients to have access to anything that they can afford. The 24-7 service is accessible via a dedicated hardware button on these phones and the concierge service is free for the first year of ownership. Vertu’s concierge is akin to the service that wealthy clients have access to through American Express.

At the Consumer Electronics Show in Las Vegas, I had stopped inside a Vertu store located at the Wynn Hotel and store reps say that the Vertu phones are popular with clients in Asia and the Middle East.