Nokia is just hours away from taking the stage as its press event in Abu Dhabi, but if the trend of recent leaks continue it won’t have anything surprising to announce. Leaks over the last few days have detailed the Lumia 1520 phablet and the previously unseen Nokia Guru music accessory.

Known reliable source Evleaks revealed what he believes to be the final specifications for the Nokia Lumia 1520 late last week. According to his tweet, users should expect the Lumia 1520 to feature a current-generation Snapdragon 800 processor, a 6-inch display with a resolution of 1080p, 2GB of RAM and a 20 megapixel rear-facing camera that uses the Nokia PureView imaging technology first seen in the Nokia Lumia 920. Allegedly, the device won’t support wireless charging out of the box. Users will have the option to add wireless charging to the device with a cover that Nokia will sell separately. 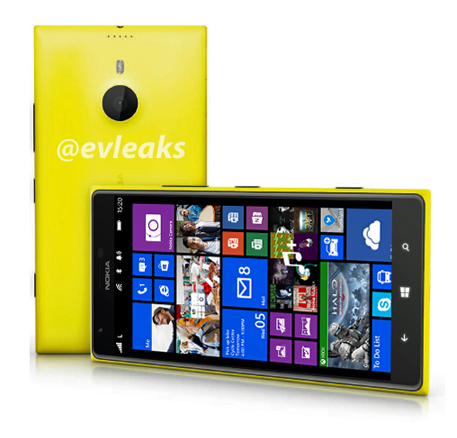 Pictures of the Nokia Lumia 1520 were leaked by @Evleaks earlier this year.

Users may get their choice of storage sizes too. Evleaks expects Nokia to announce that the Lumia 1620 will come with 16GB or 32GB of on-board storage in black, white and yellow. That is great news for users as many of Nokia’s high-end devices only come with a single storage configuration in most countries. For example, the Nokia Lumia 925 only has 16GB of storage in most countries despite Nokia positioning it as its high-end device.

All of these details match the information that’s already been leaked about the device. A source inside AT&T who spoke with GottaBeMobile confirmed that Nokia had plans to create a smartphone with a large display in September. That source also indicated that Nokia would launch a Windows-powered tablet on the carrier sometime soon.

According to Engadget Chinese, Nokia itself leaked information about the Lumia 1520 over the weekend. These specifications match those shared by Evleaks. Should it launch, the Nokia Lumia 1520 would be the world’s first phablet-sized Windows Phone. Phablets are a market now dominated by Samsung’s Galaxy Note 2.

Thanks to NFC pairing users won’t have to connect the device manually over Bluetooth. Instead users will simply tap the accessory and have it instantly pair with any Nokia smartphone or tablet that also has NFC-built in. The device in these pictures also features a headset jack, micro-USB charging port and volume controls.

While pricing for either device remains unclear, users won’t have to wait long to find out. Nokia’s event begins tomorrow in Abu Dhabi at 11 a.m. local time or UTC + 4 hours. Nokia confirmed that it will allow users to stream the event on its website.