According to leaked documents, the Nokia Lumia 521 could arrive for T-Mobile USA users as early as April 24th.

The leaked planograms (which are documents used by retail stores to set exact placement for products within their store) clearly list the Nokia Lumia 521 as taking the position previously held by the Nokia Lumia 810 on April 24th. The Lumia 810 is Nokia’s current mid-range offering on the United States fourth largest wireless carrier. Though we can’t vouch for the authenticity of the documents, as they were sent to TmoNews, the publication has a great track record with legitimate document leaks. 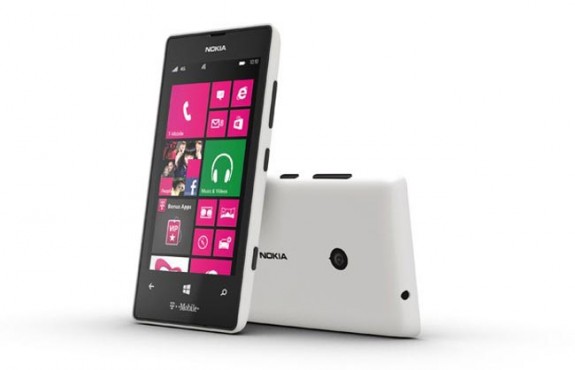 This planogram also lists the Nokia Lumia 810 is being “EOL,” or End of Life, in May. Usually an EOL status indicates that the device isn’t being made any longer or won’t be available from that particular retailer anymore. As the Nokia Lumia 810 is a T-Mobile specific variant of Nokia Lumia 820, should the device now be EOL, there would be little to no chance of picking it up anywhere else. T-Mobile is also rumored to be partnering with Nokia on new flagship, currently referred to as the Nokia Catwalk. Though release details are slim, photos and specifications for that device did leak this past week.

As for as its replacement, the Nokia Lumia 521 still possesses many of the features the higher-end Nokia Lumia 810 did, including a 4” super sensitive touch screen for using the device with gloves, a 5 megapixel rear-facing camera capable of capturing 720p video and a dual-core Snapdragon S4 processor. While there is just 8GB of storage on the Lumia 521, it does have a MicroSD card slot.

Read: Nokia Lumia 521 Coming to T-Mobile this May

As the Nokia Lumia 521 is a budget handset, it does drop some of the extra features that have defined the high-end of Nokia’s Lumia line. This device won’t ship with Nokia’s PureView camera technology –in fact the device won’t have any internal camera flash at all. That’s something that may be important to users who often take photos in places that aren’t lit well. The Lumia 521 also won’t be compatible with the faster speeds available on T-Mobile’s new LTE network, instead users will have to contend with the slower 4G data standard.

A large part of what enhances the Nokia Lumia experience is the exclusive applications that Nokia adds to every Lumia device it sells. In that respect the Nokia Lumia 521 is no different. Nokia’s navigation apps, HERE Drive, Here maps and HERE transit will on ship the device.

T-Mobile has been completely quiet on the pricing of the Lumia 521 however. Since it’s a variant of the Nokia Lumia 520 we do have anecdotal evidence of what users can expect at the register price wise. Currently the Nokia Lumia 520 is £156.99 from Expansys without a contract in the United Kingdom that’s around $240.