While the photos, courtesy of TMoNews, don’t provide much, they do offer a pre-release glimpse at a phone that might be tempting to many here in the United States who have been waiting patiently for a Nokia Windows Phone to arrive.

After all, the Lumia 710 for T-Mobile is going to be the first. Well, unless the Lumia 800 and Lumia 900 – both of which are rumored for AT&T, decide that they want to launch before January 11th. 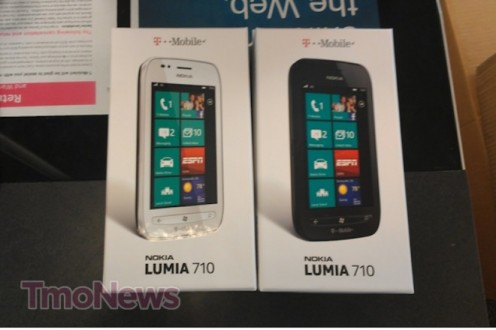 Doubtful, but anything is possible in the world of mobile.

The photos also provide us a look at both the black and white variants of the Lumia 710 that T-Mobile will be offering up.

Both models will be extremely inexpensive and will cost a paltry $49 with the signing of a new two year contract. Not a bad call for those looking for an entry level device or more specifically, an entry level Windows Phone.

Still, it might be wise, if you’re not committed to T-Mobile. to wait and see what Nokia has up its sleeve at CES before you make any sort of concrete decision on a purchase. But if there is no convincing you, next Wednesday is the day that you’ll be able to get your hands on this bad boy.